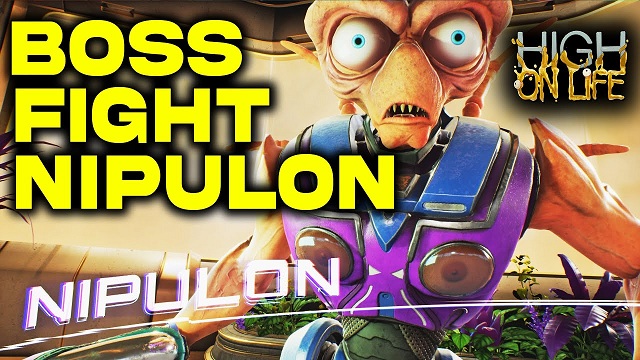 As High on Life releases, this interesting game attracts a lot of players joining in the game. Players need collect bounties and make progress in the world of High on Life. While, they have to defeat bosses to get bounties as rewards. One of these bosses is called Nipulon. Many players are wondering that how to beat this boss in the game. If you are also interested in this boss, you can read this article and learn from the guidance. Players can get Cheap High on Life Accounts to experience this new game and explore the fantasy game world.

The Nipulon Boss in High on Life

Nipulon is one of the highest-ranking members of the G3 cartel, second only to Garmantuous himself. He is responsible for all the crazy drugs the cartel pushes and is eager to use them on you with only the slightest provocation. Get ready to lose your mind.

Where to Find Nipulon Boss in High on Life

You will need to first survive the G3 attack on Blim City. Then, accept the Nipulon bounty from Gene. After that, you will need to cure the goop monster in order to get a disguise to enter Nipulon’s office undetected. Once you have that, you’ll need to head into Nipulon’s headquarters and kill your way to the top. Once there, you’ll meet Nipulon.

How to Beat the Nipulon Boss in High on Life

When you first enter the boss fight with Nipulon, it’ll be a simple encounter, where you’ll need to deal damage until around a quarter of his health is gone. At this point, he’ll fill the room with gas that will make you high. The first time, you’ll enter a weird world where you need to talk to Gene. After this, head down the hole which means you’re going ‘deeper’ into the high.

During this void segment, Nipulon will create various versions of himself that will attack you, and all of his copies don’t help against his health bar. You’ll need to find the real Nipulon, which is the one with normal colours.

Put an end to the drug den by killing everyone inside. Deal with all the G3 security and fight your way to the top of the tower. The largest room will have multiple enemy spawns, so it is recommended that you play a bit more defensive during this segment and use the debris to take cover while shooting.

Then, you will be in a corridor that leads to Nipulon’s office. However, you will have an army of Nipulon clones to beat before you reach him. The best part is that you get to use all your guns at once in this phase. You will hold two each on either hand and shoot through the clones standing in your way.

You will finally see the real Nipulon in his office with the same shield he used before. If you get really close enough to him, you will get an option to stab him. Click on the prompt and kill Nipulon with Knifey. That’s it, you will be rewarded with the Self-Actualization achievement for all your hard work.

Although the process of beating Nipulon boss is complicated, players can follow the guidance and try to complete this boss fight. You will earn the bounty as rewards in the game. And players can Buy High on Life Accounts to join in the exploration and beat more bosses in the game.