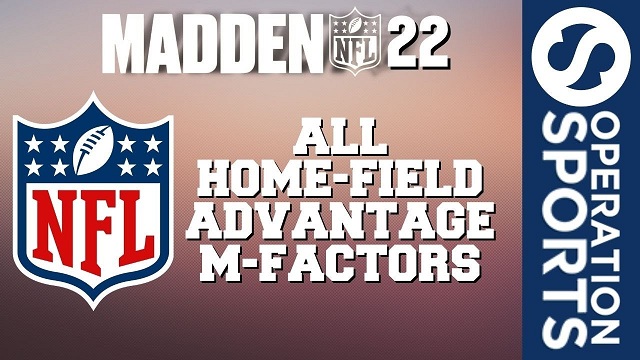 Players who are fond of watching sports matches should know the important role of crazy home crowds in the real matches, which makes sports so attractive and exciting. And players can feel the same feeling when they are playing matches in Madden NFL 22 because of all new Home Field Advantage. It can offer the host stadium energy and real changes to the game. In the past, road trips was easy to play in the game, but choosing to decide heads or tails for the coin flip was the only obvious difference on playing at home. Recently, Home Field Advantage plays an important role in the matches against opponents, like the 12th Man in Seattle, players may not easy to win them in its Home Field. Meanwhile, it is a good idea for players to buy MUT 22 Coins to purchase some special items used for their players on the pitch, like improving their speed or enhancing their stamina.

Home Field Advantage can keep pace with the new momentum meter, which will provide a special feel to every match in Madden 22. In a match, both teams can have two tiered advantages they need to unlock through creating momentum with energetic plays and reaching the half of the momentum meter. Each NFL team owns a special and additional advantage in the center of the meter when they start matches as the home team.

Although the home team has got an extra advantage, they will not make sure that they can keep it for a whole match. The momentum meter will be changeable according the performance of two teams on the pitch. If the guest team make a good start in the beginning of the match, they can defend the home field advantage and obtain some perks for themselves. But, if the home squad can make some big plays in order to use all of their advantages, the guest team will have more difficulties in wining the match. Players can experience this new feature in all modes.

Some teams have similar Home Field Advantages as they have in real sport in Madden 22. For instance, teams touring the Bears and Soldier Field in Chicago will make their kicking meter faster, which makes field goals difficult. When opponents have handled Patrick Mahomes and his team, they will meet the Chief Team in the match. At the Kansas City’s Arrowhead Stadium, opponents will counter the noise of the audience and they may have no access to make effective offense because of the interference of the loud noise.

When playing against the Denver Broncos, the guest team will lose more stamina on each match, because this mechanic may make players get used to the lower oxygen level in this Mile High City.

However, there are not all advantages are individualized for the home team. Every team can unlock two normal perks randomly each match. Just like scrambled play art or disappearing receiver buttons, some of them will make the players in the team throw the ball difficult.

It is hard for players to win a match in the tense atmosphere like KC’s Arrowhead Stadium or the Superdome in New Orleans in Madden 22. EA Sports make players realize the importance of Home Field Advantage. They need to take measures to take a lead in the beginning of the match.