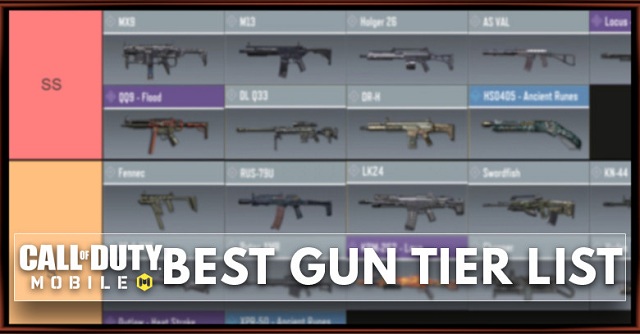 With the release of Call of Duty Mobile Season 4: War Dogs, there are a lot of changes in the game. Players can take part in a host of new events, challenges. Even more, there are various new weapons or guns for players to try out and explore. If you are willing to find a good weapon to kill more foes in the matches, you can read this article to know the list of best weapons in CODM New Season. You can Buy CODM CP to unlock more characters in the game, and experience them in the real matches continuously.

Reasons For Players to Choose These Guns

Just like the previous season, the Kilo 141 remains the meta. Some would say that the M13 is meta and the rest prefer CBR4. Either way, these guns are still the top 3 in the game. You may or may not like that but the good thing about CoD Mobile Season 4 is that, just like Season 3, there are a lot of guns that are viable.

Besides, with the slight nerf that the Kilo 141 has received now, these guns are, even if slightly, more viable. You may be sighing right now if you are tired of getting pinned down by Kilo 141-using players. Sadly, nerf to the gun did not change anything much and it is still the meta. The damage, stability at long ranges and overall versatility just makes this the best gun to use in CoD Mobile Season 4. Moreover, this is a beginner-friendly gun as well. Very easy to use with minimal recoil, you can take it into battle right away and start ranking up in ranked matches.

With the Kilo 141, M13, or PPSh-41 being downgraded, the SMG took advantage of all those gaps to have a much bigger presence between games. In fact, it has not received significant changes in the latest updates, so his peak power remains the same.

The CBR4 offers a enlarged natural bullet magazine next to a moderate damage and rate that give comfort to every player who carries it in his hands. Even so, its performance changes a bit after modifying the front adhesive. The Rubberized Vertical Grip Adhesive provides stability and Dotted Vertical Grip Sticker Improves accuracy and recoil but with reductions.

MAC 10 is the newest SMG that just release in Season 3 and it is already the best when it come to close range. The MAC 10 has really high damage and extremely fast fire rate, it also has a great strafe speed and ads speed which make close range combat very powerful.

The recoil of the MAC 10 is moderate and require sometime to get use to the pattern, and then you will see it highest potential.

The M13 is once again one of the best guns in the game. After avoiding any significant nerf with the patch, its primary drawback is still bullet speed. This makes the gun quite hard to use in 1v1s from high range. However, in the hands of a player that knows how to position, the weapon can dominate easily. The M13 has an easy spray pattern to control, significant damage and fire rate, and is once again one of the best guns for beginner and low lever players.

PPSh-41 is a very good smg to use for close range combat with fast fire rate combine with good damage, this smg can eliminate the target very fast. The PPSh-41 recoil is moderate which require some time to get used to and the accuracy is decent after 10 meters.

You can choose the best guns to use in the real matches of CODM, and the following reasons of these weapons will help you make the right choices. If you want to unlock more weapons in the game, you need Call of Duty Mobile CP Points to purchase them in the shop.