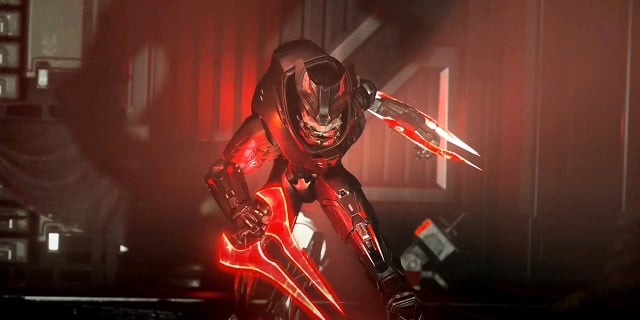 Jega Rdomnai is Escharum’s Blademaster and is one of his most Skilled Elite Warriors. The Blademaster, Jega Rdomnai, is the second Boss to use Invisibility as his weapon. You will encounter Jega Rdomnai the Blademaster in the Housing of Reckoning mission in Halo Infinite. Jega Rdomnai preferred Weapon is two special Energy Swords and he is not afraid to use them. He uses his Invisibility and aggressive tactics to overcome any Foes. He is a very tough Boss to beat.

How to Defeat Jega Rdomnai Boss

Before taking on Jega’ Rdomnai, we recommend having a Pulse Carbine and maybe a Bulldog shotgun or BR75. He has shields that will very slowly regenerate, so use the Pulse Carbine to take them down, then the ballistic weapon to do the main damage. There are refill stations and other weapons spread throughout the small ship you will be fighting in.

The main thing to keep in mind with this fight is always to keep as much distance away from the Blademaster as possible. Jega’ Rdomnai will constantly cloak himself and take indirect paths for you, unlike other Blademasters in the game. If you are having issues seeing him as he is cloaked, you can equip the Threat Sensor and shoot it at the ground. Otherwise, we recommend using the Thrust or Grappleshot for quick traversal away from him when he gets close.

Run to the weapons if you need to as soon as you load in (just be careful with Jega trailing you) then go straight down to the second floor and stand under the spot where you would have entered from the top floor with your back against the wall. Shock Coils wait for you here. You can get here by taking the stairs or dropping down the holes on the first floor.

This will be your only combat space. Use the Threat Sensor (sticking it on something like the ceiling or a crate will help it survive explosives better), and wait for Jega. He will always emerge from the illuminated spots on the left or right side of this room. It's best to wait with a coil in hand. You can hear where he's coming from before you see him if you have an audio system that allows you to hear noise on specific sides of a room. If not, keep a close eye on both sides, always keeping a Threat Sensor active.

When Jega Rdomnai is going to Ambush you, he will jump and deal a lethal blow. Using Shock Coils will allow you to stun him and you will be able to deal damage to him. When retreats away, he will go to the illuminated side of the arena. So keep an ear out as you will be able to deduce where he is at. Grappleshot & Threat Sensor are your best friends. Juggle between the two and evade his attacks while having the information of his whereabouts. As usual, using every utility you have will make your battle with Blademaster Jega Rdomnai fairly easy even on Legendary Mode.

Players should take care of the actual situation of the battles with Jega Rdomnai in order to take good measures to defeat him. So, it is important for you to equip good weapons during questing, you can Buy Halo Infinite Credits to find the best weapons for your character in the mission.