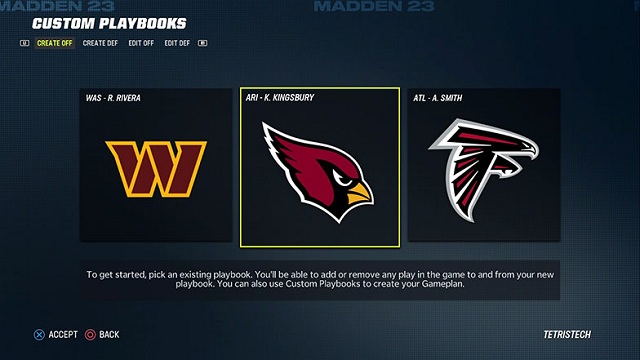 In order to win more matches in Madden NFL 23, players need execute your plays better than your opponents on the field. So, playbooks play an important role in the setting of teams in Madden 23. Each team has their own unique offensive playbook according to their various players. If you want to choose the best offensive playbook for your team, there are some good choices of them in this article. Players can buy MUT 23 Coins to upgrade their team and add more potential players at the same time.

Everyone should agree that the greatest head coach of all time would boast one of the best playbooks in the game.

There’s a reason the Patriots were able to make the playoffs with a rookie QB who, while a good player, lacks any noticeable standout skills. That’s thanks to elite play calling and game management from HC Bill Belichick. Belichick greatly modifies his game plans on a week to week basis in order to best exploit the unique weakness of each opponent, and this playbook allows you to do the same.

The Patriots are a team with a “jack of all trades, master of none” type of offensive personnel. Due to this, the Pats’ playbook is an extremely good option to have the versatility of both passing and running the ball.

If you’re looking for a playbook that allows you the versatility of attacking with any strategy depending on the situation, please choose the New England Patriots’ offensive playbook.

If you are willing to choose the balanced offensive playbook, you have the more surprising pick of the bunch, the Detroit Lions. Much like New England, the Lions have Trips TE, Gun Bunch and tons of Bunch TE options. Plus loads of raw combinations you can pull off with X Spot plays. Whether or not this high-powered scheme will result in more wins for the Detroit Lions remains to be seen. But it’s certainly one of the best offensive playbooks in Madden NFL 23.

Las Vegas has had a good offense, but took the step to be among the best offenses by adding the only wideout in Madden 23’s 99 Club, Davante Adams. HB Stretch Alert Smoke is a run-pass option (RPO) that enables a quick pass to a wideout or a handoff to Jacobs on a stretch play, using his 87 Speed to create some space between defenders. Mesh Spot gives easy drag routes over the middle and some outside routes for Carr (91 Throw Power) to get easy yardage. PA Deep Outs will hopefully fake the defense and open up the out routes deep in the defenses zone. On any passing play, always look first to Adams, then Waller, then Renfrow. Those three are your best options for easy or big yardage.

If you’re looking to win by dicing up the opponent's secondary and blowing the roof of their coverage with a pass focused offense, the previously mentioned Kansas City Chiefs are a great option.

The combination of the extremely talented QB Patrick Mahomes and pass minded HC Andy Reid makes the Chiefs’ playbook one with a comprehensive selection of passing concepts. The playbook comes with a good combination of passing plays targeting all levels of the field, from the deep balls that take advantage of Mahomes’strong arm to underneath options designed to benefit from players like TE Travis Kelce and WR Juju Smith-Schuster.

If you want to find good offensive playbooks for Madden 23 Ultimate Team, you can think about these mentioned playbooks in advance. And you also need find good players to suit for the best offensive playbook. You can Buy Madden 23 Coins to search for good players who can fit for your team style. They will help you a lot in the process of attacking the defense of opponents.