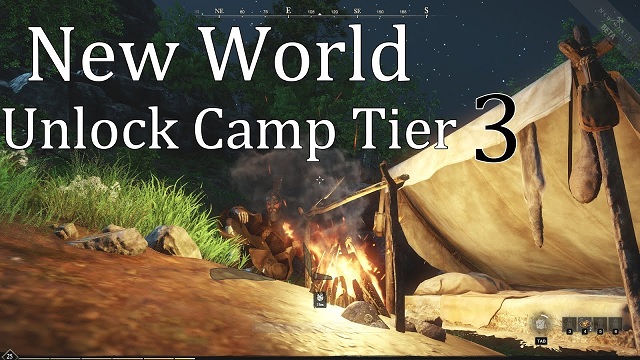 Players who often play New World may know that there are not available travel options for them during questing. So, they often choose to build a Camp in the process of traveling, which can be set as character’s spawning point. They can also do other things in the Camp, such as resting, crafting and cooking. If players want to craft high levels items or cook different kinds of food, they need to know how to upgrade their camp in New World. Besides, players can also buy New World Gold to choose some rare materials used to build their camp in the game.

New players have to finish a quest given by an NPC in the nearby settlement, and they might be one of four different people depending on which of the four starting areas on which they were shipwrecked. This could be one of four locations; First Light, Everfall, Monarch's Bluffs, or Windsward, and the quest is available in some form in all of these locations.

It's easy to find this NPC. They're near the center of town, have "Survivalist" in their title, and act like Jeremiah Johnson with a bad attitude. Their quest will include harvesting some kind of resource, likely meat or basic travel rations, or killing problem animals for the good of the settlement. Once completed, they'll give the character the ability to build a basic Tier One Camp.

How to Make A Camp in New World

Once you've placed your Camp, you'll have to build it by interacting with it. Building the Camp requires 5 Green Wood and 1 Flint - both very easy to find in abundance early on, so this should be no trouble.

Once you've set up Camp, it'll act as a crafting point where you can craft all sorts of basic tools and items - including a Fishing Pole, as long as you've found some Hemp plants along your journey. You can also rest at a Camp to heal up, and the Camp acts as a respawn point when you die, making it an essential skill and tool for surviving in New World - particularly since there are no mounts in New World, so you'll need to be travelling on foot much of the time.

How to Upgrade Camp in New World

With the camp unlocked, now is the time to work towards making it better. As stated before, this process isn’t very straightforward and there isn’t any real way to track it in-game. However, you can track it on your own. To unlock each tier of the camp’s upgrade path, you’ll need to complete an associated quest that can be picked up in one of the different regions you visit throughout your time in New World.

Here’s a quick rundown of what you’ll need to do to upgrade your camp from Tier 1 to Tier 5.

If you expect to upgrade your camp quickly in New World, you should try to improve levels of character in advance, because the tier of camp is associated with levels of character. It may take a long process to achieve the high tier of camp in the game. So, it is also essential for you to upgrade character in New World. You can Buy New World Coins to purchase more XP for upgrading. You may find cheap prices about New World Coins on z2u.com.