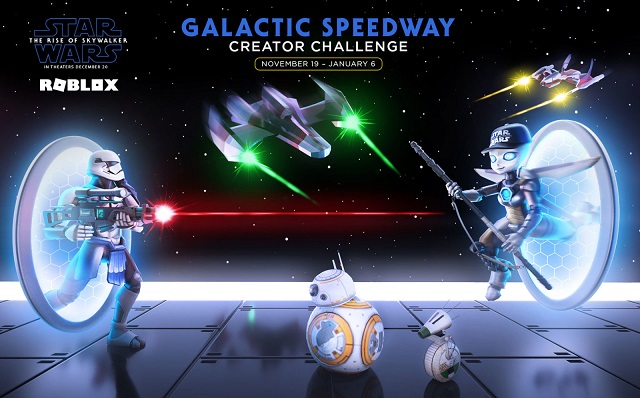 Roblox lets you build almost everything, and naturally, players start making Star Wars from the jump - but now, this intersection is becoming more formal. At the time of the release of Rise of Skywalker, the new Star Wars-themed Creator Challenge will hit Roblox with selected items from the movie, which is called Galactic Speedway Creator.

The Galactic Speedway Creator Challenge begins on November 19th and continues until January 6. The event requires you to build a drifting car that can compete online with other players and join Roblox's free content lineup to teach kids coding, modeling and game scripting. And to be a better performance, you need the help of Roblox Robux, which can affect the speed of the gameplay. If you are looking the best place to Buy Cheap Roblox Robux, then Z2U.com is your best choice!

Now, you have a chance to make your own name in Roblox. You can become a legend by winning the race. But first, you must go to the Junker’s Canyon to salvage some equipment to build your own driftspeeder. The build is as much enjoyable as the race itself.

There are some cool rewards when you complete some of the challenges. You can unlock exclusive virtual characters and items — BB-8, D-O, Kylo Ren’s helmet, Rey’s staff, and more — inspired by Star Wars: The Rise of Skywalker and learn how to build your own 3D models on Roblox, the platform that challenges gamers to become game creators.

"In the Galactic Speedway Creator Challenge, players can explore an immersive shipyard and mix-and-match scrap parts to assemble the next fastest hunk of junk in the galaxy. Create your own unique, fully customizable driftspeeders and race against your friends online," so reads the description.

Craig Donato, Roblox Chief Business Officer, said, "Our collaboration with Disney is all about unlocking your imagination, empowering anyone to create their own immersive worlds, and simply having fun while learning the fundamentals of coding and game design in the process.”

Roblox’s mission is to bring the world together through play. Every month, more than 100 million people around the world have fun with friends as they explore millions of immersive digital experiences. All of these experiences are built by the Roblox community, made up of over two million creators. We believe in building a safe, civil, and diverse community—one that inspires and fosters creativity and positive relationships between people around the world.

If you're interested, signing up is as simple as going to the Roblox Creator Challenge page. The time is limited, and if you want to learn coding, modeling and game scripting, you can grasp the chance!