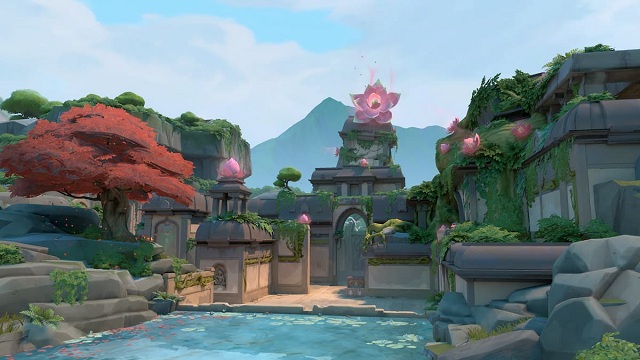 There is a new map called Lotus introduced in Valorant. Players are excited about this brand new map. And they are eager to explore the map and find good spots for agents in the match. On the other hand, do you want to know which agent is suitable for the lotus map in Valorant? We are going to list several good agents for this map in the article. Players can get Cheap Valorant Points to buy some good skins for agents in the game and decorate them with the latest skins.

The New Lotus Map in Valorant

The new Valorant map consists of 3 plant sites like Haven. Each site can be accessed from multiple angles, and the map doesn't seem to provide too many safe positions to hold from passively.

Lotus also features new mechanics like two rotating doors that can be opened from both sides, a breakable wall, and a silent drop. There are also a lot of gradual elevation changes inside the sites, unlike in other Valorant maps.

Some Good Agents to Play in Lotus Map

The Lotus Map is designed with multiple levels and vertical spaces. These unique elements of the map provide players with the opportunity to utilize them to their advantage during gameplay. By utilizing these spaces, players can take unexpected angles and surprise their enemy team. This can give them a strategic advantage and increase their chances of winning the match.

Fade is the newest initiator to join the Valorant Protocol. Although it’s been a while since she’s made it to the game, her entire kit makes her a wonderful Agent on Lotus. First of all, her abilities aren’t line-up dependent, so they’re easy to use. Secondly, unlike Sova’s Recon Bolt, it’s tough to evade her Haunt. For any map in the game, intel is key. With Fade, you’ll be able to quickly gather intel on your enemies, without much hassle.

Omen’s pinpoint smoke placement skills combined with his teleportation abilities make him a prime candidate for any Lotus composition. On defense, an early smoke on an attacking side choke point can allow himself and other teammates to get into an aggressive off angle more safely. When attacked, throwing a smoke at the A Stairs is the gateway to a successful A Site execution.

Lotus has many nooks and crannies to teleport to and hide in, and most corridors, hallways, and even lots are narrow enough for Paranoia to have a strong effect in most scenarios.

Ghanaian controller Astra should feel at home on Lotus. With three sites, her ability to deploy smokes globally should come in very handy, especially for teams relying heavily on default plays.

For instance, she can play at C Mound on attack, while still helping her team take vital A Main control with a Nebula smoke. A Main provides a very oppressive sightline for snipers, and blocking that off can help your team take crucial space.

On defense, she can take advantage of the multiple narrow choke points leading into B site, slowing down fast pushes with a cleverly placed Gravity Well or Nova Pulse.

Much like Jett and Raze, Neon’s movement abilities make her a strong pick for Lotus. Her Fast Lane wall will cause plenty of confusion and disruption on its small sites, and her speed will allow her to get up close and personal far quicker than opponents may expect.

At the same time, her Relay Bolt stun may prove effective around the map’s tight corners, allowing her to clear the path ahead of her with ease.

Neon’s High Gear sprint also allows her to rotate quickly, a big advantage given Lotus’ size and its three sites. This is also one of the reasons why she is a strong pick on Haven, the only other three-site map in Valorant.

If you have no idea about the choice of agents for Lotus map in Valorant, you can consider these mentioned agents in this article. You can experiment them in the training matches and familiar with their skills. Then, you can use them to play the new Lotus map well. In addition, players can Buy Valorant Points to unlock more agents for preparing for the matches in Valorant.