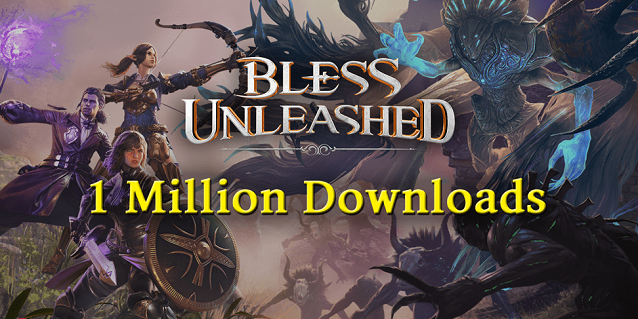 Bless Unleashed is a reworked MMO of Bless Online gameplay, which seems to be incredibly popular on PC platform. The game has been released on August 6th and has since gone on to be downloaded over a million times.

It has also become one of the most popular titles on Steam, which concurrent player counts often peaking over 75,000. For those unfamiliar, here’s the official description of Bless Unleashed.

“Bless Unleashed is a Free-to-Play epic action MMORPG that takes players on an epic journey across a dynamic, sprawling world and tests their mettle against vicious monsters and in perilous dungeons. Built on the Unreal 4 Engine, Bless Unleashed also features unrivalled graphics for the genre that really immerse players in the vibrant landscapes. Deeply rewarding combo-driven gameplay mechanics and a persistent progression system also add to the complexity of the game.”

For those not up to speed, Bless Unleashed is an action-MMORPG set in a sprawling fantasy open-world built in Unreal Engine 4. It was originally launched as “Bless Online” before being scrapped and rebooted as Bless Unleashed. The new version has since launched on Xbox One and PS4 last year, but a PC port has been long in the making and is now obviously being very well received by its playerbase.

The Exalted edition includes all the aforementioned perks with extra an extra card, 2,300 Lumena, 100k seeds, premium benefits for 30 days, Telepost Discount Ticket for 30 days, and a Bag Expansion Ticket x5. The pack is now for sale at $39.99.

The Ultimate pack is what you’ll want if you plan on spending a whole lot of time on the game. It includes the Premium Bless Pass, 5 cards, 6,000 Lumena, 300,000 star seeds, premium benefits for 90 days, telepost discount ticket for 30 days, a Gold Boost Ticked for 30 days, and a whole lot more. The pack is now for sale at $79.99.

If you want to try this gameplay, you will need a lot of in-game currency – Starseeds! Z2U.com is the best place to buy Bless Unleashed Star Seeds, cheap, safe, fast, 24/7! And if you have extra star seed, you can also sell them at Z2U.com!