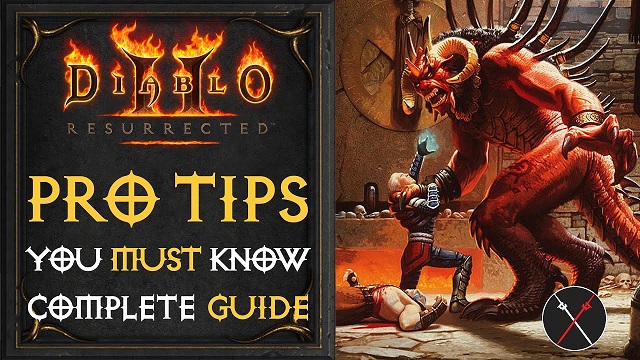 Diablo 2 Resurrected is a new game that released a few days ago. If you are a beginner, you must want to know grasp some must-know tips before playing the game! Here are the important tips for you:

Classes are a defining trait of the Diablo franchise, and Diablo 2 has a great selection of weird and wonderful characters to play as. Players can step into the shoes/robes/loincloth of the following:

Each plays entirely differently, too. The Barbarian, for example, can wield two-handed weapons against the minions of hell, while the Assassin specializes in placing traps. The creepy-looking Necromancer can raise the dead to fight for them, while the Sorceress flings spells around like it’s no one’s business. Not sure which one to check out? Good thing our friends at Maxroll.gg have a character planner for you. Each class starts with only a handful of abilities but each soon grows into deadly whirlwinds of spells, blades, and undead fury once they level up.

Diablo 2 doesn't really have an endgame, but the nature of its procedurally generated levels and respawning enemies means you can run the same bosses over and over in search of loot. In the early game, Act One's Black Marsh is home to the Countess who commonly drops runes useful for crafting gear that can carry you through to at least the end of Normal difficulty. Look for Tal and Eth runes to create the Stealth runeword for body armor. It provides poison resistance, faster run/walk, faster cast rate, faster hit recovery, and more. Shael and Eth go into shields to create the Rhyme runeword, with better block rate, 25% to all resistances, and a boost to magic find. Leaf is a fantastic runeword for Sorceresses. Tir and Ral runes go into a stave for a huge boost to fire skills and cold resistance.

Don't activate Gem Shrines as soon as you see them

Diablo 2 doesn't have an endgame like you'd expect from a modern game, and eventually you'll likely spend a lot of time on boss runs, where you repeatedly square off against a boss to earn better items. But even before reaching that point, you may find yourself underpowered, so you'll want to grind out XP (and hopefully earn some good items) by repeating certain sections of the game. Tristram, the Countess, Act 1's catacombs, Act 2's tombs, Act 3's council, and so on are fertile ground for earning XP more quickly than usual; be prepared to make your way through these numerous times.

Diablo 2 Resurrected Gold is the important currency used in this game, which can be used to buy D2R items, weapons, armor and more! To equip yourself with unique and legendary items, you need to purchase enough cheapest D2R Gold via Z2U.com!