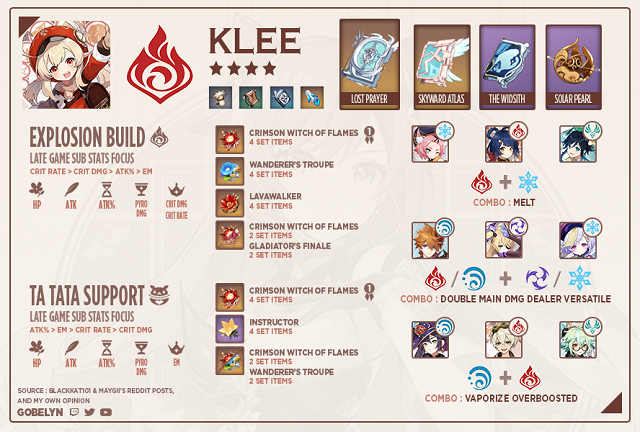 The best weapon for Klee is Skyward Atlas, hands down. It increases her Elemental damage and empowers her basic attacks. While you’ll spend a good chunk of your time doing Charged Attacks, you’ll still be weaving Normal Attacks in here and there for the effect. If that’s too rich for your tastes, Solar Pearl is a great second option and the new Dodoco Tales seems built specifically for Klee.

Skyward Atlas (5-Star) – Increases Elemental damage Bonus by 12 percent. Normal Attack hits have a 50 percent chance to earn the favor of the clouds, which actively seek out nearby enemies to attack for 15 seconds, dealing 160 percent attack damage. Can only occur once every 30 seconds.

This is probably clear by now, but Klee needs attack power and Pyro damage boosts. These Artifacts are best for Klee:

Crimson Witch of Flames. This is the best Artifact set for Klee. A two-piece set gives a 15% Pyro damage bonus, and a four-piece set increases Burning and Overloaded Elemental Reactions by 40%. Also increases Melt and Vaporize damage by 15% and doubles the two-piece effect when using an Elemental Skill.

Gladiators’ Finale. A two-piece set increases attack power by 18%. Don’t go for a four-piece set though (no bonus for Catalysts).

Resolution of Sojourner. This three- to four-star set gives a 18% attack bonus and increases Klee’s Charged Attack critical rate by 30%. It’s great if you don’t have the other Artifacts sets yet.

Talent 1: Roiling Rime, When Klee’s normal attacks and Elemental Skill deals DMG, she has a 50% chance to obtain an explosive spark, which makes her next charged attack cost no stamina and deal 50% increased DMG.