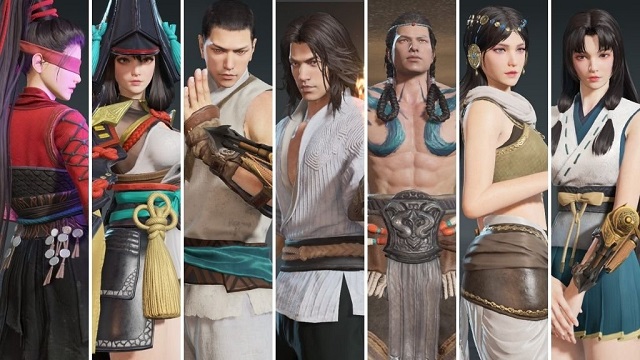 Naraka Bladepoint has seven different Characters: MATARI, KURUMI, TEMULCH, TIANHAI, TARKA JI, VIPER NING, YOTO HIME. Follow this short article, and find out the abilities that suit for each character and which character is the best!

Throughout the beta, Matari has been an incredibly strong character in solos because of her stealth abilities and mobility. Her ultimate, Unseen Wings, allows her to become invisible. When invisible, Matari is very hard to grapple and can deal out a lot of damage – fortunately, a recent rebalance has reduced her stealth duration. Her F skill is Silent Flutter – a teleport skill with a 20 second cooldown that’s excellent for mobility and escaping unfavourable fights. She can also use her ultimate to escape, too, making her a slippery foe to face.

Kurumi is a healing character with abilities that largely focus on team play. Therefore, you should only use Kurumi if you are playing in trios lobby. You could still perform well in solo matches, but her abilities aren't going to prove very useful. Kurumi has the following abilities:

Kurumi is essential in team games, but her abilities won't have much effect in a solo lobby. If you are going to play solo, it's best to choose a hero with damaging abilities, like Viper.

Temulch is a good defensive fighter, but he’s usually not considered the best Naraka: Bladepoint character. Although he’s got great defense against ranged attacks, this can feel a bit superfluous during individual melee fights. And while his Ultimate is especially useful against enemies who rely on mobility, Viper Ning is arguably the better character for crowd control. That said, Temulch can use his skill far more often than other Naraka characters, allowing him to evade, defend, reflect damage, and shoot wisps to your heart’s content.

Ultimate: Titan’s Call: Turns him into a Vajra, a Goro-Esque character that can grab and smash foes dealing heavy damage. Moreover, the Vajra form also allows to grab teammates and heal them. Hence, making him a useful asset in both solo and co-op.

Tianhai is an all-rounder in the game, he can attack, defend and heal. But players have to be cautious because his ult sacrifices a lot of speed for tremendous attack power and healing.

Tarka Ji has an insatiable thirst for alcohol and relentless hunger for freedom – in fact, the Loyal Drunk channels this carefree spirit into his fighting style. His skill, Inner Fire, sees Tarka Ji enter a defensive stance. During this state, the indomitable hero can block any melee attack and even counter his enemy’s slashes, stripping them of their armor and health. Tarka Ji’s ultimate, Blackout, imbues the drunken hero with fiery energy.

Viper Ning is the blind Blademaster of West Kunlin and is quite versatile with good Damage Per Second (DPS) potential. Her F skill is Yushan Enigma, while her Ultimate is Twilight Crimson. Yushan Enigma produces a destructing blast, pushing all your enemies back. It can also interrupt Blue Focus but won’t have the same effect on Focus.

Yoto Hime’s F skill is Spirit Slash, in which she channels energy to hit her enemies for damage. While her blade is hanging in the air, you can press F again to teleport her to the blade to launch a mid-air slash. It has a 25 second cooldown, but it also resets after defeating an enemy, up to six times every 30 seconds, so it’s great for finishing players on low health. As long as your enemy doesn’t have explosive projectiles, it can also block incoming ranged fire attacks.

To help you fully enjoy the game, there are many cheap Naraka Bladepoint Items for sale at Z2U.com, including Naraka Bladepoint Immortal Treasure, Skins, Outfit, Weapons, Gift and more! No matter what you want, you can find them here with the lowest price ever!