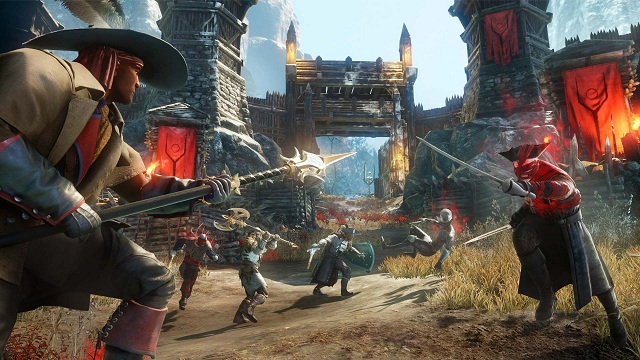 New World Factions have been an important part in the Continent Aeternum. If players want to take part in the territory war, they need choose one of three factions to join in. The Factions serves as the entrance to PvP in New World. Players of different factions can participate in the large 50v50 players War games or 20v20, PvPvE Outpost Rush Games. The aims of the war is to take control of the settlements, forts, and regions of the island. Factions also has some restrictions on who you can play with. If you want to play with your friends, you should make sure you have know the information about factions in New World. New World Gold is popular with players in New World. They can use them to upgrade the level of gear in the game and build their unique settlements. 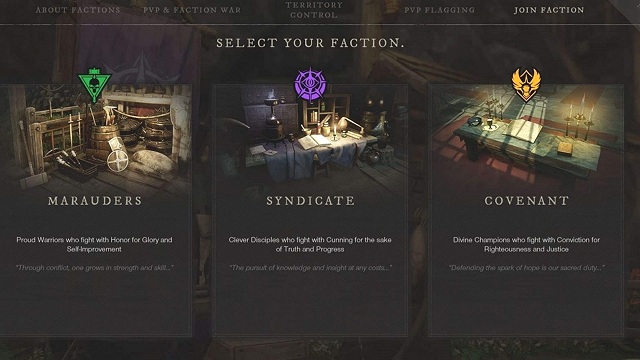 What are New World Factions?

There are three New World Factions for players to choose. They all aim to control Aeternum. You have to join one of three Factions which allow you take part in the New World’s PvP activities. You will be informed when the company need players to join 50v50 Wars for territory. In the faction, you can increase your Rank by completing PvP activities and increase your Faction’s influence in specific territory.

According to the map in New World, you will find that different factions control different colored regions. Players who join the specific faction gain benefits , such as combat buffs, and they can set taxes for their settlement in order to defend your faction’s territory and decrease the influence of other Factions’ territory. If you have undermined them enough, you can declare war on your rival faction’s territory to conquer the forts. Three Factions are waiting for you to join in.

The Syndicate- This secretive organization shows that they search for knowledge and bring Aeternum into a new age of enlightenment. The Syndicate’s banner is purple with a big bright eye.

The Marauders- A group of militarized warriors who use their eternal lives to improve their combat skills with the aim of conquering Aeternum. The Marauder’s banner is green with a black hammer and a golden skull.

The Covenant- This zealous and righteous group aims to protect lives on Aeternum by purging the evil. The Covenant’s banner is dark red with a shining gauntlet and winged shield.

Three Factions has different values and aims in New World. And you can choose one faction which appeals much to you.

How to join a New World Faction

Players can not join in the faction at the start of the game. They should upgrade their level to 10 and complete the main story quest called Committed to Cause. If you have meet these requirements, you can go to the main settlement in your region and talk with three representatives. You will choose one faction to join in after talking. You will be taught about how the New World Factions works and the work you should do to help factions increase the influence of territory.

When you have joined in a faction, the PvP content is open to you. Players can fight against other PvP players in the war. Players can also join in the Faction’s army to attack together. The faction can arrange the teams of players to defeat enemies effectively.

To conquer new territory, players need first undermine the opponent by completing Faction Missions. With the growth of Faction Influence, the territory will fall into conflict, which make huge 50v50 warfare against rival factions.

Players are interested in joining in different factions to fight against enemies. If you want to play with your friends, you should make sure you are in the same faction in advance. Players from different factions can’t play together. And if you want to perform well in the war, you can purchase New World Coins to perfect your character. Cheap New World Coins are available on Z2u.com.

« What is the Use of MUT 22 Training Points, How to get Madden 22 Training PointsNew World What Does Gems do and How to get Gems, Best Gems for Weapons and Armor »
tags:
New World Factions How to join a Faction in New World New World Factions Introduction Buy New World Coins
Related News:
New World Release Date, Price, Platform, Map, Beta and Everything You Need To Know
New World Has Been a Big Success on Steam So Far that beta sees over 200,000 players
How to Level Up Fast in New World: Best Ways to Level Up fast and quick in NW
New World Begins Open Beta from September 9th to September 12th
New World Three new weapons leaked: Daggers, Blunderbuss, and Void Gauntlet