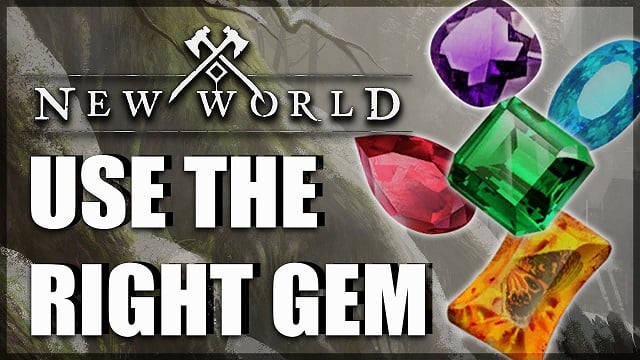 For New World Gems, players have many doubt of this kind of stuff, such as can you remove gems New World? What gems do what new world? New World How to get gems fast and easy? Scoll down and you will find the best solutions!

Can you remove gems New World?

The fact is, you cannot remove gems from items in New World. With that in mind, it's best to plan your upgrades a bit. Because if you mess it up and put the wrong gem into the piece of gear, you cannot get it out again.

What can we do with New World Gems?

Gems are basically modifications and boosts that you’ll be able to place on certain items within New World. Most of the time, these weapons/armor will be blue in rarity, so around level 22 is when you’ll mainly come across these gem slots. You’ll know if a piece of gear has a gem slot, as it’s indicated through a circle right next to the logo of the gear. If the slot is empty, then you can equip a gem to this piece, if the two are compatible with one another.

While socketing gems on your New World armor is not that interesting, your choice for weapons is much better.  There are quite a lot of uses, including healing increases, mixed damage, single element or taunt focused gems.

If you’re a tank, and you’re using something like the War Hammer or Great Axe, you’ll likely want a Cornelian gem. The reason why is because slotting a Corenlian gem into these two weapons offers you the opportunity to gain a taunt on one of the weapon skills. For the War  Hammer, Shockwave gains a taunt effect on enemies the skill hits. The same can be said for the Great Axe, Hatchet, Rapier and Hatchet for one of their skills resp[ectively.

The nest gems for armor in New World entirely depends on your playstyle. If you’re only interested in New World’s PvE content, then you’ll more than likely want to use the Carnelian gems. The Carnelian gems lower your threat, making it easier for the tank to keep aggro on adds or a boss. Of course, don’t use this if you’re a tank, as you want to keep threat.

If you’re a fan of PvP, and you are noticing a weakness in your playstyle, perhaps you can put gems in to make up for it. For example, if you find that War Hammer builds are great counters to you? Perhaps you can socket Jasper gems to reduce the amount of damage that Strike damage deals. Are Bows and Muskets causing you an issue? You’ll want to use the Onyx gems to get a flat percentage reduction to incoming physical damage.

How to get New World Gems?

Getting gems in New World is largely dependent on luck. They come from mining Iron, Silver, Gold, Platinum, Starmetal, and Orichalcum, but the chance of finding a gem is fairly rare. Just as you do when mining for rare ores, you’ll want to eat food in the potato family to increase your mining luck or equip the Miner’s Charm. The best chance of finding gems comes from Iron and Silver deposits, both of which are abundant around Windsward. However, some players report higher chances of finding gems in the Amrine Temple Expedition. These expeditions only unlock after you acquire the Azoth Staff, so make sure to complete the Hermit’s quests if you want to try this route. Of course, wealthy explorers also have the option to buy gems and gemstones from the trading post. Gems come in four rarity tiers, with rarer gems offering more powerful skills.

How to fefine a Gemstone in New World?

After getting a gem, you can refine it by taking it to the stonecutters and using it with a corresponding mote; for example, a fire mote for rubies. You can find motes at any magical plant (harvesting level 30) or magical stone (mining level 50). There are four tiers of Gemstones in New World: Flawed Cut Gemstone (zero skill requirements), Cut Gemstone (50 skill), Cut Brilliant Gemstone (100 skill), and Cut Pristine Gemstone (150 skill.)

In generally, Gems are used to upgrade your weapons and armor in order to help you get better equipment to cause huge damage! To get top-rated stuff in NW, you can also choose to buy cheap New World Coins at Z2U.com, and use our special offers to purchase you wanted items in NW MMO gameplay!

« New World: A Brief Introduction of Factions and How to Join a Faction in New WorldNew World server transfers delayed and won’t let you change regions »
tags:
What Does Gems do How to get Gems Best Gems for Weapons Best Gems for Armor
Related News:
New World Release Date, Price, Platform, Map, Beta and Everything You Need To Know
New World Has Been a Big Success on Steam So Far that beta sees over 200,000 players
How to Level Up Fast in New World: Best Ways to Level Up fast and quick in NW
New World Begins Open Beta from September 9th to September 12th
New World Three new weapons leaked: Daggers, Blunderbuss, and Void Gauntlet