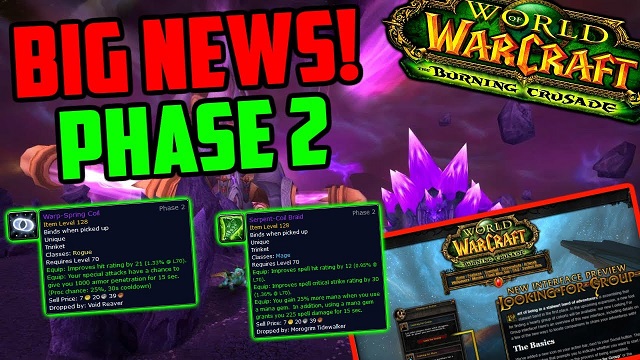 The WOW TBC Classic is now live on the PTR (public test realm), which will kick things into high gear! So When will Phase 2 of The Burning Crusade Classic come out?

WoW: TBC Classic’s content rollout is scheduled to take place over five “phases.” These phases will each include new raids, dungeons, and PvP seasons for players to explore and conquer. The second phase of WoW: TBC Classic has been available for testing on the game’s Public Test Realm since July 29.

Here's what we know so far about the WoW Classic TBC phase schedule:

Phase 1 will include Karazhan (10 man), Gruul's Lair (25 man), and Magtheridon's Lair (25 man) for raids, as well as 8 dungeons. It's available now, though we don't have an end date just yet. With the previous WoW Classic schedule, we expect it will run for two and a half months.

Phase 2 will will introduce Serpent Shrine Cavern (25 man) and Tempest Keep (25 man) as well as the Arena Season 2. Phase 2 has no official start date, but based on WoW Classic, we estimate it will kick off on August 15th, and run to October 29th.

Phase 3 will include the Battle for Mount Hyjal (25 man) and Black Temple (25 man) raids and Arena Season 3 bringing some great action for raiders and PVPers alike. We expect this phase will start around October 30th, and run to January 14th.

Phase 4 will include Zul'Aman (10 man), and allow players with less time to play to catch up. Unfortunately this phase won't include a new Arena Season per Blizzard's comments so far. We estimate this phase will kick off around January 15th, and run to March 30th.

Phase 5 will include Quel'Danas (zone), Magister's Terrace (5 man), and Sunwell Plateau (25 man).  This massive final phase will likely begin around March 31st, and will run until we assume WoW Classic Wrath of the Lich King will be revealed, and kick off with its pre patch.

Hope this guide can help you to learn more about WOW TBC Classic phase schedule. And by the way, if you need to buy TBC Classic Gold, then we Z2U.com is also the best place for you!