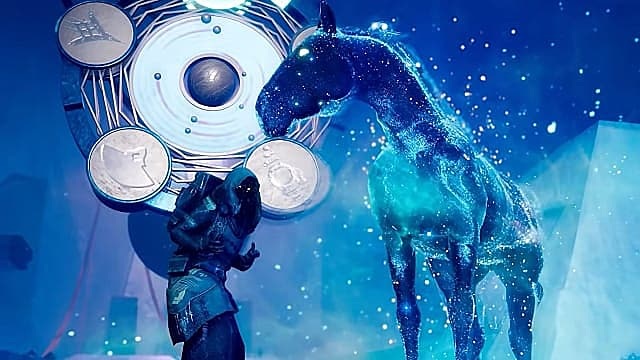 Due to the new update of Destiny 2, players can join in a special and new six-man activity in Destiny 2 called Dares of Eternity. This special activity is organized by Xur and his new horse Starhorse. Players can press the new Eternity tab to see the whole information of this activity. So, it is important for players to know how to complete Dares of Eternity in the game. In addition, player can buy Destiny2 Silver to collect some rare items for your character in Destiny 2.

The Introduction of Dares of Eternity

Dares of Eternity is an activity that players can queue up for that requires a fireteam of 6 players. The regular version has matchmaking, but for Legend runs of Dares of Eternity, players will need to use Bungie's LFG service to find friends.

Dares of Eternity yields quite a bit of loot and allows players to level up their rank with Xûr, who now can be accessed in his Treasure Hoard sub-location at Eternity. There, players can unlock various chests with keys and coins gained from playing Dares of Eternity to get their hands on new weapons and cool cosmetics - such as the infamous rock ship.

How to Complete Dares of Eternity

Much like Season of the Lost’s Astral Alignment, Dares of Eternity has a set formula, though it varies depending on your luck and whatever encounters the game throws at you. The activity has enough variety that it may take a few runs until you see them all, and the rotating wheel makes it a more exciting endeavor than watching Drifter spin motes around as you cross your fingers and hope it’s not Hive.

Since Dares of Eternity also brings Champions depending on the faction, make sure to have a few mods or weapons with intrinsic anti-Champion capacities. Divinity, for instance, will instantly stun Overload Champions, and also helps with debuffing priority targets now that Breach and Clear is gone (and will be missed).

Dropping into a match of Dares of Eternity puts you in a large, golden room with Xur and Starhorse. Take the portal between them to the Eternal Valley, and clear the Taken you find there.

Once the Valley is free of enemies, the Wheel of Adversity will appear, a game-show selection wheel you spin to determine which enemy type you’ll face next. All enemy factions are represented, and the objectives vary somewhat between them.

The actual first Dares of Eternity encounter takes place in two parts. The first is a simple add wave you must defeat as quickly as possible. Yellow bar and Champion enemies spawn here, but they aren’t as powerful as in higher-level Nightfalls or Raids.

The second Dares of Eternity round in an encounter will have an objective, usually defeating a specific number of boss-level enemies. An immunity shield will protect each boss. To break it, find the yellow bar foes that glow with white light and have an X above their heads. Defeating glowing enemies will drop an item you can use to break the bosses’ shields.

Lucky fireteams will have a chance of increasing their loot if they get hit by a Lightning Round. As of 2021 December, these are known to be completely random, but the chance is apparently increased by being efficient. There's a total of three Lightning Rounds, each worth one chest.

To complete the rounds, players must stay alive and capture all the zones within the time limit. All the while, Taken enemies will spawn around the map. However, there are also a bunch of Heavy Ammo crates that will appear to make the fight less hectic. Xûr's Chosen, a special enemy, will also spawn during this time on the arena, and it's recommended to kill him for the related anniversary triumph.

Players can obtain some special items as rewards from Dares of Eternity in Destiny 2. In addition, if you want to improve your character, you can Buy Destiny 2 Silver to purchase essential weapons or armor. There are cheap prices about Destiny 2 Silver on z2u.com.