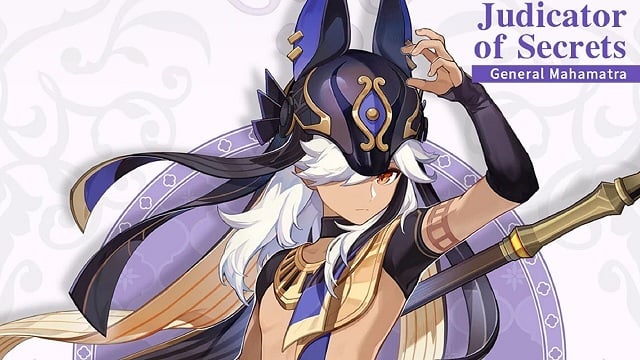 Cyno is a new Electro 5-star Polearm making their way to Genshin Impact. He is a very unique character with a special Burst that transforms his fighting style completely.

How to Build the Best Cyno in Genshin Impact 3.1

Cyno is a main DPS using a polearm assisted by the power of his electro vision. He has destructive power during his Pactsworn Pathclearer, which is activated by his elemental burst, and can even extend it with his elemental skill. This will, in turn, make it so that the elemental burst will have little to no cooldown at all as long as you hit the resets.

Best Weapons for Cyno: Staff of the Scarlet Sands

Staff of the Scarlet Sands is tailor-made for Cyno, and even a quick look at the stats shows why. Critical hit rate is the secondary stat, and the value is more than double the Primordial Jade Winged-Spear. The passive skill converts elemental mastery to attack, making sure Cyno hits hard every time, assuming you have a build or party that prioritizes elemental mastery.

The chances of getting a new character and their unique weapon tend to be low, though several other viable options exist for Cyno.

Primordial Jade Winged-Spear, Xiao’s polearm is a strong fit, with a secondary stat that boosts critical rate by up to 22 percent at level 90 and a passive skill that, at its base level, grants an attack buff of 21 percent after the spear hits enemies. Combined with Cyno’s critical damage stat, that means you’re dishing out a lot of hurt.

Thundering Fury works best with Cyno not only from its 2-piece bonus that offers bonus Electro Damage but also the 4-piece bonus that reduces the cooldown on Elemental Skill upon causing Electro based reactions.

This composition is Cyno’s go-to for all kinds of content, and relies on his raw Electro damage output, which is then amplified by Aggravate, Resonance, and an off-element support. You would generally choose to run Dendro resonance for more EM, but Electro resonance is a good option if Energy is scarce. For the 4th slot, Zhongli is preferred to make Cyno’s combo string uninterruptible, but Kazuha and Bennett are also decent options if you’re fine with dodging enemy attacks.

Many players are happy that the introduce of new Electro character Cyno. They have more choices to build the team due to the combination of Electro and Dendro element. So, you can follow the guidance to build the best Cyno for your team. Meanwhile, you can Buy Genshin Impact Genesis Crystals to purchase good gear for Cyno in the process of leveling or questing.