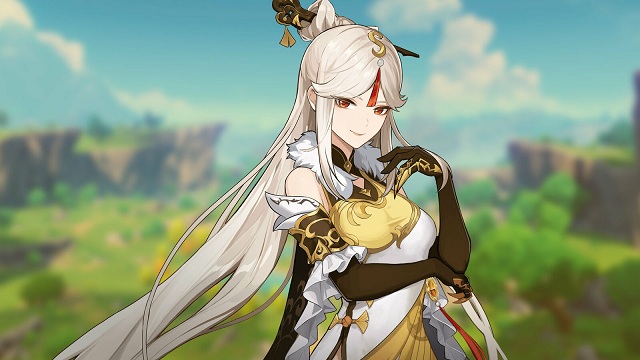 Players are often excited about the new characters in the latest update of Genshin Impact, while you may ignore some important characters in the game. Like Ningguang, which is a character that many players have overlooked her due to her low overall popularity. If players want to build a unique and powerful DPS, you can choose Ningguang as the first place. Players can build a good team with powerful characters if they have good Genshin Impact Accounts, they can accomplish more quests or challenges in Genshin Impact.

She’s primarily a support DPS and excels in both roles. Ningguang’s normal attack creates Star Jade fragments, which join with her charged attack to deal extra damage. Her Elemental Skill creates a Geo screen that, if you pass through it, enhances her Geo damage and explodes during Ningguang’s Burst to deal even more damage.

The abundance of Geo floating around Ningguang’s attacks make her ideal for shields as well. The only downside is attack speed, which is quite slow compared to other catalyst users, such as Yanfei.

How to Build the Best Ningguang in Genshin Impact

Whether Ningguang will be taking the field as a main DPS or a sub DPS, you’ll want a weapon that focuses on increasing her damage output. Memory of Dust is great for this — it increases Shield Strength while also increasing ATK after scoring a hit on an opponent. Skyward Atlas and Lost Prayer to the Sacred Winds are also great 5-star Catalysts for Ningguang, as they both provide Elemental DMG Bonuses.

However, Ningguang is a beast with 4-star Catalysts as well. If you can’t get a hold of her 5-star weapons, you can aim for Solar Pearl if you’ve got the Battle Pass or The Widsith otherwise. Solar Pearl will increase your Normal Attack DMG upon using an Elemental Skill or Burst and your Skill/Burst DMG upon using a Normal Attack, allowing for a well-rounded DMG increase. The Widsith grants new characters taking the field a random ATK, Elemental DMG, or Elemental Mastery Bonus.

How to Build A Team With Ningguang

Building a team around Ningguang is easy thanks to the limited amount of Geo elemental reactions in the game. We’ve gone for Jean as our healer alongside Venti in a support role to maximise Ningguang’s damage output. Ningguang’s biggest weakness is her lack of AoE damage. While her damage output is impressive against single targets, there’s very little she can do against a group of enemies.

Ningguang should have another Geo character to trigger the Protective Canopy Resonance effect. It increases shield strength by 15% and gives a 15% increase to all damage if the character is protected by a shield. Albedo would be ideal, since he can function as a main DPS as well, though Gorou and Itto are good alternative choices.

You’ll want to include two additional, separate elements to maximize your shield coverage as well. We recommend Pyro and Hydro to trigger the Vaporize reaction and deal even more damage. Bennett is a popular choice thanks to his AoE attacks, though any Pyro character would do. Xingqiu is a solid Hydro pick thanks to his rain swords Burst and the continuous damage it deals.