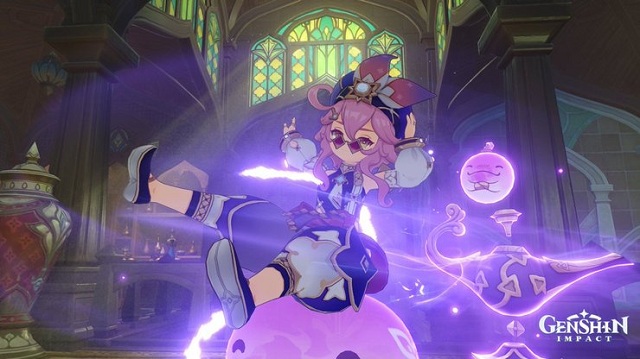 Dori was the second four-star character to release for Sumeru. She has an interesting attack style as she doesn’t fight enemies herself. Instead, she uses an Electro vision, coupled with a genie who swings around a claymore for her.

How to Build the Best Dori in Genshin Impact

Dori is a support character at heart, strengthening her allies with her Jinni's HP and energy regenerating tether. As such, you'll want a build that maximises her healing and the buffs she can offer with her burst.

Figuring out the best Dori weapon is a bit tricky, given how claymore stats tend to skew towards attack. However, the Favonius Greatsword is Dori’s best choice thanks to its benefits to energy recharge. This claymore has lower attack, but energy recharge is its secondary stat and, at 13 percent, it’s the highest recharge stat among all the greatswords. The passive skill generates more energy particles with critical hits. If you have a spare Skyward Pride laying around, that would technically be the most versatile choice for Dori. Its secondary stat increases energy recharge, and the passive skill boosts all damage by 12 percent.

The Sacrificial Greatsword is another solid choice. This one also has energy recharge as its secondary stat and a high chance of ending your elemental skill’s cooldown timer after you use the skill.

Dori's best artifacts are once again a simple affair. Like many elemental support specialists in Genshin Impact, you'll draw out her best performance with four pieces from the Noblesse Oblige set, which adds +20% to her Elemental Burst DMG and (crucially) boosts her whole party's ATK by 20% for 12 seconds after she deploys her burst.

If you're looking to mix it up a bit, with a focus on providing Dori with some well-rounded boosts, try equipping two pieces each from Emblem of Severed Fate (grating a +20% to Energy Recharge) and Tenacity of the Millelith (granting her +20% to her base HP, which will help her scaling when healing her teammates).

For team compositions, Dori can be very flexible and might be able to fit in any team that might need more energy. An example team composition that includes Dori is going to be a mono electro team.

In this team composition, you mostly want to have everyone's elemental burst out as soon as they're off cooldown as this team is going to almost always have them up. Venti is here to group people while Raiden provides massive damage with Yae Miko and Dori supporting her.

If you are lack of the Healer character in your team, you can try to build the best Dori healer in Genshin Impact. You can adopt the guidance and level up Dori fast in the team. You can Buy Genshin Impact Genesis Crystals to get good weapon or gear for dori, which protect her well in the battle against enemies in the process of exploration in Sumeru Region.