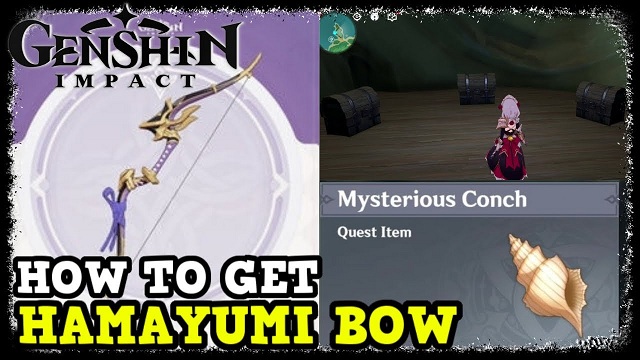 What is the Hamayumi Bow in Genshin Impact?

The Hamayumi is a four-star bow in Genshin Impact, especially gear towards being used by DPS characters that do not use a lot of elemental energy. The bow is craftable at a blacksmith which makes it an easy weapon to get for players that do not wish often on banners.

The Hamayumi has the trait Full Draw which increases the damage of normal and charged attacks by 16% and 12% respectively at zero refinements. This effect increases by 100% when the player's energy bar is full. This ultimately makes it an ideal weapon for characters that do not use their elemental bursts often, such as with Fischl whose elemental burst is similar in effect to her elemental skill.

How to Obtain Hamayumi Bow Blueprint in Genshin Impact

To find the location of the Inazuma Bow in Genshin Impact, aka get the Hamayumi Bow blueprint, you need to give Mysterious Conches to Takashi for seven days straight. If you haven’t yet come across this NPC, I recommend checking out our Takashi Mysterious Conch Genshin Impact guide for a detailed rundown. Here’s a quick explanation – Takashi is a guy that you can find on the small peninsula in the north of the island of Tatarasuna. His house is on the beach in the west of said peninsula. It’s hard to miss, since it’s built around a large boulder that looks like a conch.

After you have given the conches to Takashi, go inside the conch house and open one of the three common chests. There is a small chance that from one of the common chests you might get a blueprint for Hamayumi Bow. You can do this only once every day and you might have to repeat the process for 10-15 days before you get the blueprint. Getting the blueprint also unlocks the “Thank You, Come Again” secret achievement.

In fact, it is currently believed that this bow blueprint found after going to Inazuma can only be obtained after turning in Mysterious Conches seven different times on average. While it is possible that there is some amount of randomness to this that would allow a player to receive the blueprint before opening their seventh chest, it appears that the odds are, at the very least, greatly increased upon hitting that number.