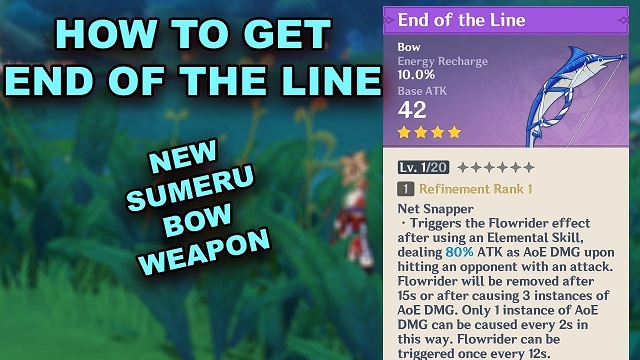 Due to the 3.0 update of Genshin Impact, there are some new weapons and characters introduced into the game. Some players are interested in the End of the Line Bow weapon. They want to know how to obtain this weapon in Genshin Impact. This article will tell you the guidance about it, please read it carefully. In addition, players can use Cheap Genshin Impact Genesis Crystals to unlock more new characters to build a good team for questing in the game.

What’s the End of the Line Bow in Genshin Impact 3.0?

End of the Line is a four-star bow that offers a buff to energy recharge as a substat, and triggers Flowrider when you use an elemental skill, dealing 80% attack as AoE damage when you hit an opponent, up to three times. If you're a no-spend player, it's worth grabbing if you plan on building any archers in the future and want a few more damage-based options.

How to Obtain the End of the Line Bow in Genshin Impact 3.0

Even though The End Of The Line Bow is a powerful 4-star weapon, you don’t have to fight bosses to get it. You also don’t have to farm the crafting materials and craft this item as you can buy it.

To get the End Of The Line Bow for free in Genshin Impact, you must visit the Sumeru Fishing Association and talk to NPC Loumelat. Head to the Adravi Valley of Sumeru, and then go north of Port Ormos. Here on the coast, you will meet the NPC Loumelat, and you can talk to her to trade later. Loumelat offers several items, but the most important thing is that you can get a treasured bow with an unusual appearance. The currency that Loumelat accepts is different types of fish, and here is what you need to collect to buy The End Of The Line Bow:

4x Peach of the Deep Waves

How to Refine the End of the Line Bow

Is End of the Line a Good Weapon?

The End of the Line is okay in terms of damage for Sub-DPS characters. Characters who need high ER% to use their Burst off-cooldown will find that using the Favonius Warbow can potentially deal more damage since you can offset the abundant ER% by investing more substats into CRIT or even ATK% instead.

Compared to this weapon, characters who need more thnt 160% ER will need to offset that amount by investing more into ER% substats, which could have otherwise been used for better CRIT substat rolls instead.

Players who want to find a good weapon for Sub-DPS characters can select the End of the Line Bow. This weapon will provide better damage towards enemies in battle and good effects on AoE damage. If you are looking for other good equipment for characters, you can Buy Genshin Impact Genesis Crystals to purchase them from the shop fast, which saves you a lot of time on questing.