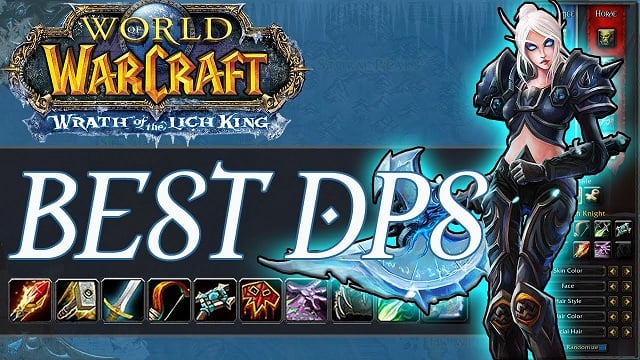 With the release of WoW Classic WotLK Pre-Patch, many players have access to join in the WotLK in advance. They are familiar with the classic features and astonished about the new update of WotLK. Meanwhile, they are also curious about the tier list of WotLK DPS classes, which will guide them which classes or specs are suitable for this expansion. We will list top WotLK DPS Classes for players to consider in this article. In addition, players can use WoW WotLK Gold to accelerate the process of leveling up your characters in WotLK Pre-Patch.

Top DPS Classes in Wrath of the Lich King

In the first phase of the Wrath of the Lich King, Assassination Rogues find themselves in the top spots of the DPS charts, commonly considered to be the single best damage-dealing spec.

The reasons are clear: a very big percentage of an Assassination Rogue’s damage comes from poison effects (Deadly Poison IX, Envenom), and thus bypasses their enemy’s armor. This causes them to be more or less unaffected by the scarcity of the armor penetration stat on Phase 1 equipment.

The Frost Death Knight spec's overall damage is undoubtedly very good and consistent. They excel during the early phases of the expansion from the high damage of their magic-based skills. Where many other melee classes have to suffer from the lack of armor penetration available, Frost DKs aren't as concerned. Throughout the expansion the battle between Unholy and Frost is a back and forth for the top Death Knight DPS position. However, some players may find difficulty with the Death Knight skill priority and rotation.

They slightly lag being affliction in terms of raw damage but have Demonic Pact, which is a spell power buff only for them. They have buffed single target DPS with new talents empowering their Felguard pet. Their cleave and AoE abilities, such as the Metamorphosis, have a cool down that gives them access to 2 AoE abilities (Immolation Aura and Shadow Cleave) which are strong in AoE situations.

Marksmanship Hunters (MM) are subject to poor performance early on due to their physical damage relying on armor penetration. However, in later stages, their single target damage becomes top-notch. They do lack any meaningful AoE and Cleave damage, but they do bring one raid buff. Many Hunters choose to start out as Survival and then switch to Marksmanship once more armor penetration is available.

Feral Druid gets a big change in playstyle with Powershifting gone. They now get many DPS tools focused on bleed effects, which means they are no longer useful only for tanking and can switch roles when needed.

They have incredible single-target and AoE damage with the new Swipe (Cat) ability, allowing them to swipe near enemies and inflict 250% weapon damage. They have their drawbacks in phase 1 with less effective cleave damage abilities and DPS coming majorly from bleeds.

Warriors are the classic wow mains that we roll to warlocks and are now rolling back to warriors to once again. Meet the kings of the jungle. One major difference from Classic WOW to Wrath of the Lich King is that arms warrior is not the best spec. And arms are actually ranked quite low on the DPS meters all the way down to B tier.

There are many choices of DPS classes for players in WotLK classic. You can choose one to play according to your role in the team or game modes. To build a strong DPS character, good gear is essential for the growth. You can Buy WoW WotLK Classic Gold to select the suitable gear for building the strongest characters in WotLK Classic.