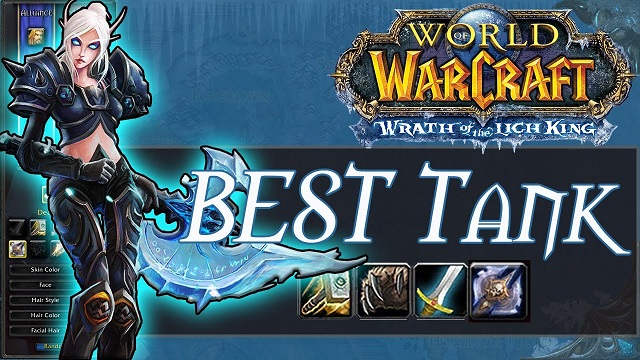 As the official release of WoW Classic WotLK, players have chances to explore the large world of WotLK and experience the familiar things as before. To start the adventure of WotLK, players need select a class to play in the beginning. Some players especially love the tank class in the game. They are willing to know who is the best tank class in WotLK. If you are interested in the tank tier list, you can read this article and get the guidance. If you need buy equipment for characters in WotLK, you can use WoW WotLK Gold to trade with other players in the market.

Protection Paladins are the absolute best tanks for all of Wrath, without exception. Paladins in general are considered to be the overall winners of Wrath, and for good reason. As a class, Paladins bring the best raid buffs in the game, to the point where most raids will want at least 3-4 total just to cover the various auras and buffs that they offer. As a tank, Protection brings the strongest defensive cooldowns in the game combined with the overall best damage mitigation to make them extremely desirable throughout Wrath. Paladins have virtually no downsides when it comes to tanking in Wrath, and specifically shine when it comes to AoE threat generation and consistency when compared to the other tank classes. At the high-end, some guilds will even opt to run double Prot Paladins for a significant portion of Wrath. Paladins are everything you want in a tank, with virtually no downsides.

The Blood DK are a touch squishier than the Paladin since they don't have a shield to block, but they have ways to make up for it. They are the de facto anti-magic damage tank, and honestly complement the Paladin quite well.

They do bring some great utility, with abilities like Death Grip, Strangulate, and the ever powerful Raise Ally as a combat resurrection. On top of their defensive capabilities are quite good with Anti-Magic Shell, and Icebound Fortitude. They also have a bunch of self healing abilities, which eases the burden on the healers. On top of that they have Will of the Necropolis, which isn't exactly a cheat death, but really reduces the amount of damage taken at low life.

Feral druid feral druids have the highest health pools in the game by a wide margin. This makes them extremely easy to heal and it makes your raids much more consistent. Meanwhile, they have far and away from the highest damage of any tank. You have new abilities like berserk which allows your mangle to hit 3 targets and even makes you immune to fear. Of course, you also have to innervate for your mana-hungry mages and still the only battle rez in the entire game.

One of the best parts about feral druids is that when they aren't taking a fight, they can still pump out top 5 DPS in a raid thanks to improved abilities like their multi-target cat swipe. The big downside for feral druids is that they don't have many taunt options, so they'll rely heavily on misdirects from hunters to get fights started. That being said feral druid is arguably the simplest and most forgiving tank in Wrath. Without a doubt that feral druids are one of the best tanks in WotLK Classic.

Protection warriors have their spotlight by being by far the best tanks in Classic and TBC. Warriors' defensive cooldowns consist of their shield wall, last stand, shield block, and blood rage which are by far the worst self-deaths in the game. This is because their cooldowns are just too long and even though they can be glyphed. Most of the time, you'll just get a weaker version of a DK's defensive with a longer cooldown.

Another big problem with warriors is that everything they can do, a paladin can do better. Their utility is not that great and the only thing they're good at is for stacking sanders with devastation. But your fury warriors will do that anyway. One job they're famously good at is holding the little heads in the ruby sanctum, because they have the 40-second shield block and their aoe is stunned with shockwave. Unfortunately, you'll be really shooting yourself in the foot if you pick a protection warrior as your main.

If you have no idea of the choice of Tank class in WotLK Classic, you can read this article and know the basic tier list of several tank classes. It is useful for you to know this in the beginning of WotLK Classic, which helps you a lot in the later build of tank class in the game. If you want to level up characters quickly, you can Buy WoW Classic WotLK Gold to earn more XP for upgrading in WotLK. Then, you will have access to experience the endgame contents earlier than others.