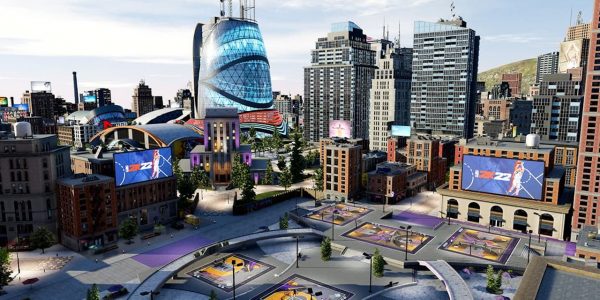 2K’s new basketball game NBA 2K22 will be available on the PS5/PS4/Xbox Series X|S/Xbox One/Switch/PC platform on September 10th. Previously, the official has introduced the exclusive content of the next-generation version of The City, the official Introduced a breakthrough story experience that combines The Neighborhood gameplay and MyCareer mode into one.

New City Quests will be solo ventures for players to experiment with their careers off the court, from becoming a fashion mogul to a rap icon; An increased population will make The City feel as if it’s teeming with life, featuring new NPCs to fully bring the world around you together; Ability to upgrade your crib – such as a penthouse with a zipline to take you directly to specific courts – as a player’s home plays a part in MyCAREER as a location where coaches and friends will give players new quests; Explore new buildings added to The City, including a matchmaking building and Club 2K, where players can access music from some of the hottest labels that drop with every Season; Rewards include new ways to get around The City, such as Go-Karts and Inline Skates, new emotes, intros and outros, animations, customized name plates and more.

While PS5 and Xbox Series X/S gamers get The City, those with the Nintendo Switch, PCs, PS4, or Xbox One will have The Neighborhood. This year’s version of that mode gets a unique look as it will take place aboard a cruise ship called the Cancha del Mar. An image from the top deck appears below with gamers participating in 3v3. The cruise ship will travel to various locations and make stops. Based on the Courtside Report, NBA 2K22 Seasons will feature what’s called Excursions. These special trips to different locations throughout the year let gamers explore new areas, participate in challenges, and more.

Exclusively on PS5 and Xbox Series X/S, MyCAREER and the City will be completely integrated for time, with you using the same character across both of them. The goal here was to “deliver on the narrative experience” by tearing down the wall between the two modes, which is sort of similar to how MLB The Show 21 integrated Road to the Show’s character into Diamond Dynasty for the first time. That integration was kind of hit and miss with fans of that game, so hopefully it is handled a little better here overall in the end. However, we won’t really find that out until the game actually releases.