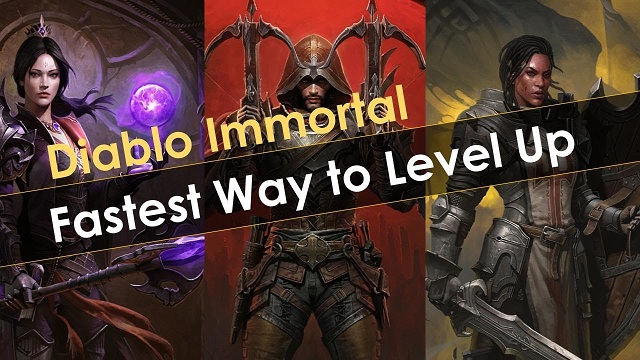 Players who have experienced the Daiblo Series know that XP for leveling is important in the process of exploration. After reaching certain levels, they have access to explore more deep contents in Diablo Series. This is the same as Diablo Immortal. If new players first play Diablo Immortal, they should pay attention to level up their characters in the game. There are several fast ways for you to get more XP in this article. If interested, please read it carefully. Players are looking for Diablo Immortal Platinum that can be used to trade item with other players in the game.

Some Fast Ways to Level Up Characters in Diablo Immortal

There is no substitute or competition for the raw experience that the daily bounties give. With eight total missions to get every day and each netting a big stack of experience (among other rewards), the best way to level up fast every day is to make sure to get these done.

If you don't complete a certain number of bounties in a given day, they do rollover (up to a maximum of 24 Bounties), but this will reset back to 8 every Monday.

Rank Up The Battle Pass Fast

Free tiers of the Diablo Immortal Battle Pass are actually one of the best sources of XP in the game. However, there is a trick to optimizing your Battle Pass XP gains. The amount of XP you receive from Battle Pass rewards scales with your character level. So, it is actually more efficient to hold off on claiming Battle Points and Battle Pass rewards until you reach a level gate.

You can get a good amount of experience points by unlocking Monster pages in the Bestiary. If you defeat the monsters in the field (excluding Rifts), you can fill out one entry for every 10 Monstrous Essence that occasionally drop from defeated Monsters, and each entry you complete nets you experience points.

No matter how the difficulty level is adjusted, killing beasts will have a chance to yield Monstrous Essence globes that go toward the bestiary. Turn in the globes to the Bestiary every time the stack hits ten as soon as possible. Players cannot collect extra globes once they have ten, so frequent trips are mandatory.

Try to Use Area of Effect(AoE) Attacks

Like many games, you will see and use kills combos in Diablo Immortal. A basic attack usually hits one enemy at a time; however, AoE will allow you to hit multiple enemies at a time within a highlighted area but for a limited amount of time. This will allow you to defeat a swarm easily, along with more power and more experience points.

Any gamer's first encounter with bonus experience will likely be through the massacre bonuses. These are experience boosts that multiply the amount of experience gained by killing monsters, so long as the attacks are performed quickly.

After killing fifteen enemies, players will see the timer on the screen. Make sure to attack another enemy before that counter expires to keep the massacre bonus going. In rifts, that can get into triple-digit territory, and the bonus experience from such a rampage can fill up several bars for the cost of just a few blood-soaked minutes.

These useful ways will help you earn a large amount of XP for your character, and you can early meet the endgame contents in Diablo Immortal. If you are looking for suitable gear, you can Buy Diablo Immortal Gold to get them from the travelling merchants in the game. Some merchants usually sell nice items in the shop.