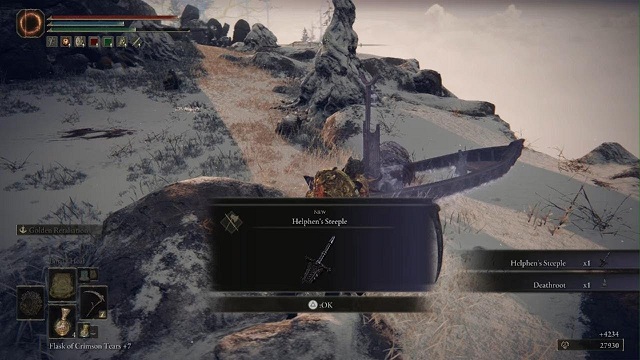 Players who are going to combine Death Sorceries and magics with their Elden Ring Journey will need to find Helphen’s Steeple, which is a large Greatsword that can make additional Magic damage due to its Ghostflame ability. So, players who are fond of playing in a dark knight style are willing to choose this cool weapon. This article will tell you how to find Helphen’s Steeple in Elden Ring. Meanwhile, if players are going to collect some rare crafting materials for weapons, you can buy Cheap Elden Ring Runes to gather them quickly, which save you more time on questing in Elden Ring.

Helphen's Steeple is a greatsword that primarily scales with Intelligence and Strength, with a minor scale in Dexterity. Players will need 22 Intelligence, 19 Strength, and 10 Dexterity to wield the sword correctly. It uses Somber Simithing Stones to upgrade, and when fully upgraded it packs quite a punch both physically and magically (its parameters at Level 10 are an even 247 for both). What makes Helphen's Steeple such an interesting weapon is its unique skill, Ruinous Ghostflame. This ability applies a Ghostflame effect to the weapon which not only boosts its magic damage further but also applies Frostbite build-up.

How to Find Helphen’s Steeple in Elden Ring

This weapon won’t be able to be obtained until pretty late in the game. It is located in the Giants’ Mountaintop which is on the other side of the Grand Lift of Rold. To reach this area, you first need to make it to the capital city and defeat the Morgott. Once that boss is defeated, you will be tasked with going to the Giants’ Mountaintop and given the medallion for the lift from Melina.

To actually get their hands on the greatsword, players need to deal with a rather strange boss that's actually hidden fairly well. The Mountaintops of the Giants has its own Tibia Mariner that players will need to take down, but he's pretty far into the zone, near Castle Sol.

Riding a ghostly boat, the Mariner is a hunched over skeleton in tattered clothes. It steers its vessel and tends to attack players with its hunting horn and undead skeleton creatures. Players will need to defeat this boss to be rewarded with the Helphen’s Steeple.

To reach him, players should start from the Snow Valley Ruins Overlook Site of Grace, near the Minor Erdtree on the map (it's across the bridge before the Erdtree). Heading Northwest towards the cliffside close to Castle Sol, players can peer down over the edge and find a Tibia Mariner rowing its boat on a small bit of cliff. Players that jump down can engage the boss, but beware as the area is pretty small. Those that fail to find the Tibia Mariner quickly may fall victim to its massive skeletons, which it summons whenever a player is nearby.

Head out of the city using the large door in the northeastern part of the main road. Follow the pathway until you reach the Grand Lift of Rold. When you reach the top of the lift, head to the northwest. Along the river, you will see an area where the ground raises and you can get up on the cliffside. Follow the cliffside to a graveyard to the northwest and you will find a Tibia Mariner. This Mariner won’t appear as a boss and won’t summon enemies to aid him. Defeat this Mariner and you will be rewarded the weapon.

If players expect to master this Ghostflame Greatsword well in Elden Ring. you have to reach the requirements of this great weapon. So, you can Buy Elden Ring Runes to improve some specific stats of characters in order to use this weapon well. This weapon will make great magic damage towards a variety of enemies in dungeons quests.