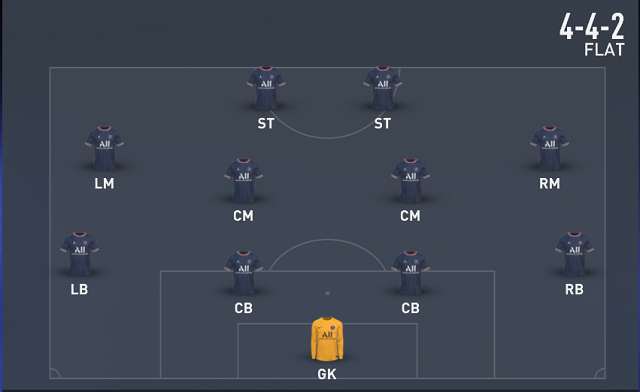 FIFA 23 Ultimate Team mode is one of the most popular game modes in FIFA Series. Players have access to collect various desired players and build their unique team in this mode. Then, they can play matches against opponents from all over the world. If you want to play well in FUT 23, it is important for you to figure out the importance of formation and custom tactics in the team. So, we are going to recommend 442 formation and custom tactics for you to build your strong team. Players can use FUT 23 Coins to upgrade their team in time and improve its depth in FIFA 23.

Using the 4-4-2 formation, gamers will find that they have a tight defensive line. Midfield should begin with a fairly tight line that can have the wingers and/or one center midfielder pushed up for slight changes to team shape. Having two striker options can be a blessing when on the attack. This will offer more options for players that can take on a shot from an unfavorable position but still end up scoring.

Left-back: Stay back while attacking

Right-back: Stay back while attacking

LM & RM: Cut inside, Get in behind

CMs: Cover center, One on Stay Back while attacking, One on balanced

ST: Stay forward, Get in behind

In 442 formation you need to get the ball to the strikers as quickly as possible. Most of the time it would be the striker on balanced instructions who would be receiving the ball. Once he receives the ball trigger the other striker for a run. Make sure at least one striker is fast enough to out run the defenders.

Make use of the side midfielders by getting those through balls to them. Do not worry about defense as this year the players on balanced instructions automatically come down to defend. Try to do 1-2 pass within the strikers get past the defenders.

FIFA 23 players can decide how aggressive their defending should be. For example, a high line is perfect for attacking but leaves you open to balls in behind, whereas a deep line is ideal for when you’re defending a lead. You can also change your defensive style and how deep you want to sit on the pitch with the width/depth slider.