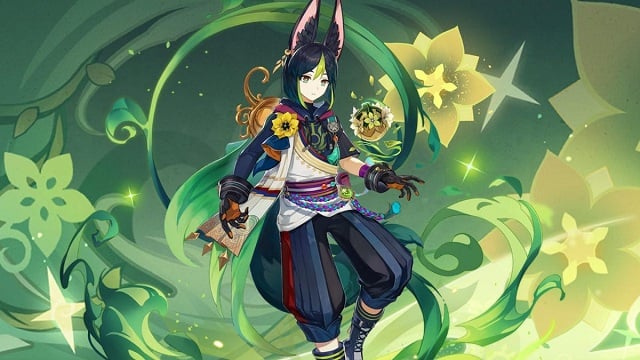 Tighnari is the first 5-star Dendro character in Genshin Impact. He's a Bow character who focuses on Charged Attacks and Taunting much like other characters like Ganyu. As the head of the Forest Watchers, he plays a key part in Sumeru's storyline

How to Build the Best Tighnari in Genshin Impact

After reading about the skills Tighnari possesses, your first thought might be to build for the main damage dealer. This character requires a high amount of field time, and it'd be detrimental to your overall damage if you didn't focus on making him the only main DPS with this build.

The new five-star bow Hunter’s Path is Tighnari’s best weapon. The secondary stat raises critical rate, which admittedly isn’t the most useful since Tighnari has flat critical rate and damage stats. The passive skill is what makes this one so potent, though.

It boosts all elemental damage by 12 percent, and after you hit a foe with a charged attack, the user’s charged attack damage increases by 160 percent of their elemental mastery. The effect lasts for 12 charged shots or 10 seconds, whichever comes first. Time it with Tighnari’s elemental skill, which drastically shortens the the time it takes to charge a shot, and that’s some impressive damage potential.

Choosing an artifact set that works with Tighnari is also rather simple. The Deepwood Memories set was launched alongside him and is hands down the best artifact set you can place on him. This set focuses on making Tighnari’s Dendro attacks hit a bit harder.

You can get the Deepwood Memories artifact set from the Spire of Solitary Enlightenment in Sumeru. Getting the artifacts only uses resin, so you will be able to get a five-star set without having to spend a single dime.

Tighnari wants to trigger elemental reactions. His high elemental mastery is going to make this pretty evident, so if that's the case, why not take advantage of it? Since Tighnari will want to be the character that deals a truck-load of damage with his skills and charged attack, he's going to be the main DPS of the team.

As Sub-DPSes, Fischl and Yae Miko perform the same role: you want them to drop their elemental skills on the battlefield and switch them out so that Tighnari can deal damage and trigger Catalyze reactions. Sucrose is also a great pick as another Sub DPS as she increases the Elemental Mastery of the characters in the team when she triggers Swirl; this is a great way to boost Tighnari's Elemental Mastery. Dori as a healer can be replaced by any other support, however, she also has her merits - namely her lamp which can regenerate energy to whoever it's connected to.

If players want to build the best Tighnari DPS build in Genshin Impact 3.0, you can learn from this guidance and build the powerful character in the game. And you can Buy Genshin Impact Genesis Crystals to purchase essential gear for Tighnari, who will help you a lot in the exploration of Sumeru Storyline.