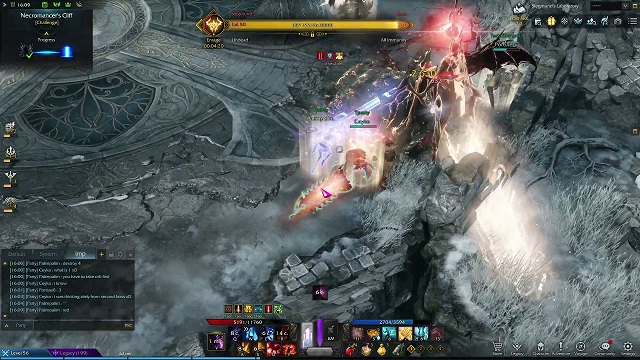 When it comes to Necromancer’s Origin, it is the second part of the first Abyssal Dungeon in Lost Ark. If players want to loot some rare items in the game, it is a good chance to go to the Necromancer’s Origin. In order to enter this dungeon raid, players need to reach at minimum 340 Item Level, they also need to complete Demon Beast Canyon in advance. So, players can learn the guidance about how to complete this dungeon raid from this article. Moreover, if players want to experience the endgame early, you need to upgrade your item level quickly by using Cheap Lost Ark Gold, high-level items may have good effects on the exploration of raids in Lost Ark.

This is the first boss that you will come across in Necromancer’s Origin Abyss Dungeon in Lost Ark. You’ve already encountered this boss before in the Vern storyline. Unlike the first Dungeon, if you manage this boss poorly, you might end up wiping out the whole party.

Every time the boss roars, each player in your team will get a red orb stack above their name. If this orb stack count gets to 5 then you will end up dead. A yellow orb spawns on the mini-map in order to counter the stacks; this removes all stacks from that player.

Additionally, you must rotate the yellow orb surrounding your party as soon as possible. If the group that you’re in is a matchmaking PUG group, it would be best for you to establish a pick-up order or make the players pick up an orb as soon as possible.

Sigmund the Immortal presents players with their first “soft enrage timer.” If you’re not an MMO vet, this essentially means that Sigmund the Immortal gets more difficult the longer the fight drags on. And if you and your team don’t execute his mechanics correctly, that can be forever.

When Sigmund first approaches 0 HP, he will release either a red or white burst across the arena. At that moment, two orbs will appear in each corner of the arena, one red and one white. Your team must interact with each orb that matches the color of the burst. If done right, Sigmund will revive with around 1.5 million HP. If an orb is missed, or if anyone interacts with the wrong color, he will revive with far more.

The other core mechanic happens when you drop the boss’ health to 1. When the boss gets to one HP, he will then do a large AOE and become invincible. Players need to separate themselves, one north, one east, one south, and the other player west. Each of these directions will have a red and a black orb. You need to click the orb; depending on the colour of the AOE you can see lighting the zone up. Get it wrong, and it detonates.

This is the first Stagger Check that players will see in an Abyssal Dungeon, and it's quite an easy one to pass. Essentially, Sigmund will start filling a red telegraph that covers the entire arena and a yellow bar appears underneath him. Players have until the red telegraph fills to drain this Stagger Check using their Stagger-based abilities. Failure to do so will cause Sigmund to unleash his attack that does high amounts of damage to anyone even close to the recommended Item Level.

Players need to take various methods to deal with different kinds of bosses in the dungeon raid, and they will get good loot from the rewards in the end. If players want to have a good performance in the dangerous raid, you can Buy Lost Ark Gold to purchase the suitable weapons for your characters, which make high damage towards foes in combat.