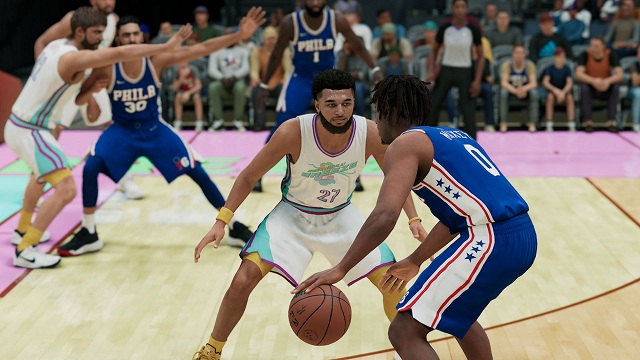 NBA 2K23 will be released in this summer, which is one of the greatest basketball simulations nowadays. And there will be a lot of changes in the latest version of NBA 2K Series, like player ratings and the shooting function. Many players are willing to play MyCareer mode in the beginning. It is important for you to choose a good team at first. So, we will list some good teams for you to play in NBA 2K23 MyCareer mode. Players can use NBA 2K23 VC Coins to select the good equipment for characters and improve their capacities in the matches.

How to Choose Best Team According to Your Position

We have heard the news about Beal’s re-signing, the Wizards may not be able to add anyone of note since they have even less cap room than the Nets. That being the case, Washington is the club to play for in NBA 2K23 if you’re a point guard. Ishmael Smith would be their lone opponent, and by the start of the following season, the club may be causing a stir in the Eastern Conference.

Zion Williamson, Brandon Ingram, Josh Hart, and Jaxson Hayes are already an interesting young core for the Pelicans. Add to this roster a future star (you), and it’s a force to be reckoned with, even in the overly competitive Western conference. This is one of the main reasons why Pelicans are also one of the best teams in NBA 2k23.

If you’re a point guard or a shooting guard, it likely won’t take you too long to break into the NBA 2k23 starting lineups and start making a difference instantly for the New Orleans Pelicans. The shooting guard position was already a little shakey for the Pelicans and, guard spots are pretty much yours for the taking.

The Minnesota Timberwolves have the third-least amount of available cap space this summer. As a result, they aren’t expected to make any major moves in free agency. While the future of point guard, D’Angelo Russell, remains up in the air, the team still has a glaring hole at the small forward position.

Even though the Timberwolves had plenty of draft picks, only one was technically used and it was on 6’4” Italian guard, Matteo Spagnolo. Meaning that the only way for this team to improve in the small forward department is if you choose to join them.

Chicago Bulls has every position in their starting lineup. They got Lonzo Ball, DeMar DeRozan, Zach LeVine, and then no one at the four. Then they got Vucevic at the five. So come play here at the four, a nice rebounding dude, interior paint beast type of build would be dope to play with the Bulls. Because they're having a great season, why wouldn't you want to be part of that fun?

This team will give the MyPlayer the starting role the fastest, as Looney's low 77 OVR will be lower than many players who finish playing in college. The opportunity to play with Steph Curry, one of the best point guards alive, and Klay Thompson should make and center salivate. The two forwards started the season in the beginning of NBA 2K23. This team is truly just one center away from being the best in the NBA without much contest.

According to your position chosen in the beginning of MyCareer, there will be the suitable team for you to play in this list. If you want to level up your player quickly in this mode, you can Buy NBA 2K23 VC to earn more XP for upgrading. You will become the superstar of your team in MyCareer mode.