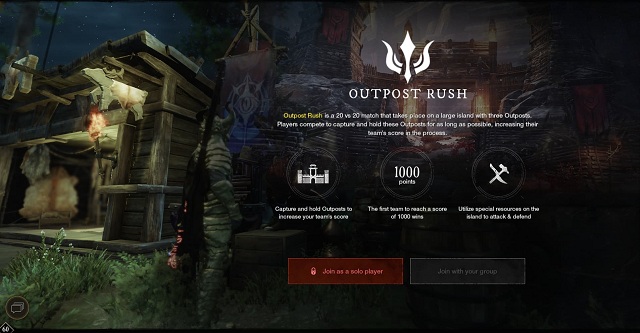 When it comes to Outpost Rush, it is a large-scale 20 v 20 PVP event that allows level 60 players to join in New World. Sometimes, players may meet 16 v 16 PVP event that depends on the queue. They will face various mechanism in this event, such as resource management, objective control, and setting up their forts to defend attacks from the opponents.

Players can join in this event with your at most five friends. You are able to queue up at a settlement Outpost Rush NPC, and start the event at the island called Nauthynos. You can learn from this article about how to join in the Outpost Rush in New World. In addition, if you want to upgrade your crafting skills in New World, you can buy New World Gold to purchase some rare materials to improve the levels of Crafting skills.

How to Join In the Outpost Rush

Before players attempt to join Outpost Rush, the level requirement needs to be taken into account. Anyone under level 60 will have to sit this one out, but that gives them more time to grind and practice the game before jumping into the PvP game mode.

For those at level 60 in New World, Outpost Rush provides another way to battle, and the process of playing is simple. First, players need to decide whether they want to play in a group or solo. If they choose to play in a group, the limit is 5, so select those teammates wisely. Solo players that decide to join will automatically be thrown into a group as the match begins.

To queue for an Outpost Rush match, players in New World need to head over to any settlement or outpost that they can find. In those areas, there will be a dedicated Outpost Rush NPC that can be spoken to. When they are prompted, the option to play as a solo player or group will appear.

Once players have decided how they’ll join, a queue will begin at the top of the screen in New World. This will tell players how much longer they have until the mode starts and how many players are in their lobby. As the timer expires, players will then be thrust into the Outpost Rush and can start laying waste to the enemy team of 20. The first team to reach 1,000 score wins. Players will earn Azoth, Coin and an Outpost Rush Crate for their efforts.

Tips About How to Play Well in This Event

Outpost Rush is arguably one of the most enjoyable parts of New World. Hopefully, it will be supported into the future with new maps and different ways of playing. Here are some tips we picked up during the closed beta.

It's all about map control, a bit like you were playing a Moba. In fact, it's a lot like a Moba. Pushing toward the map objectives can make or break the game.

Communication between your team is pretty important. Some should split to start farming Azoth, collecting resources, and others should jump right toward the Outposts.

A well-balanced team will probably mean victory: tanks, healers, ranged, and various other PvP builds are needed to win.

You don't need any specific crafting skills to be able to complete any resource gathering tasks in Outpost Rush, but it will still level up your skills.

Player who are tired of joining in the wars are willing to take part in the Outpost Rush in New World. If you want to defeat opponents easily in this event, you can Buy New World Coins to select the best weapons or armor for your character in the game. There are cheap prices about New World Coins on z2u.com.