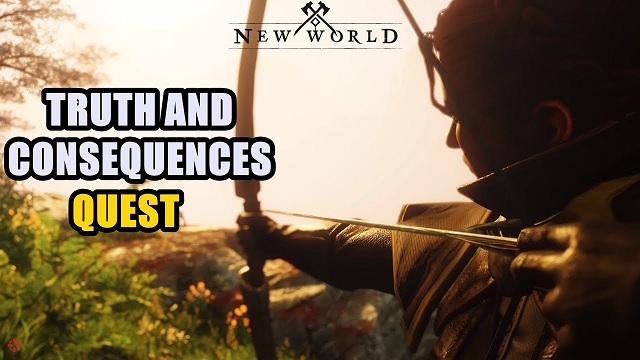 New World is a open continent for players to explore, and there are many kinds of quests for players to complete. Truth and Consequences is a quest which consists of many steps for players to explore. Some steps are easy to finish, others are not straightforward to accomplish. To complete quests in the game, character should reach enough levels to meet the requirement of quests in New World. To gain more XP in the game, you can buy New World Coins to increase your character levels quickly and be easy to accomplish quests in New World.

In addition, players may be lost in the process of completing the quest, and they feel confused about some apparent bugs in the quest. So the quest guide is essential for players when they have trouble in finding the right way to complete the quest.

First, you should gather Captain’s Orders from Cannonstorm Pirates as the main part. The step is obvious for players to follow the right way to find Cannonstorm Pirates. Players should go to Coffman’s Redoubt. It is located in the northeast from the quest river. There are many enemy pirates in Coffman’s Redoubt. Players should attack the pirates with different kinds of weapons. The defeated pirates are likely to drop the Captain’s Orders that required by the quest. Players can collect these eight orders as soon as possible if they beat all the pirates.

Players should find the Rigger’s Plea Journal Entry in this step. It is also located in the Coffman’s Redoubt. Especially, it is put on the table on the second floor of the building that is near at the quest waypoint. You should pay attention to the bright blue light which is showed by the journal entry. It is obvious for players to discover in New World.

After players check out the journal entry, they will be told to go to Letum’s Pick and search for evidence of four play. The evidence shows us about a set of bloody footprints on the path just east to Northfork on New World’ s map. Players may feel confused about this step, because they may find that their quest waypoint shows the wrong location of the quest. Players need to check the location of footprints several times and make sure they find the right way to continue the quest.

Following the Footprints on the Southern Road

Once players have checked the first piece of evidence, they should follow the path south, interact with the every set of footprints that they meet on the way. Finally, players will keep pace with the quest target when they reach Sleepy Tallow, which is located in northeast of Rattlevine Ridge. Players should interact with last footprints and go back to Sylvia Oakes to complete this Truth and Consequences quest and collect their rewards from the quest in New World. Players will get 1480 XP, 94.5 Gold, 250 Territory Standing as a reward for completing the Truth and Consequences Quest.

New World has different kinds of quests for players to choose and complete in the process of travelling. You can earn enough rewards to upgrade your character, build your unique house, and craft powerful gear in the game. New World Gold is also rewarded by quest, but the amount of it is small. If you don't have enough New World Gold in the game, you can buy it on z2u.com.

« FIFA 22 How to get Loyalty Fast and Quick, Easiest Way to get FUT 22 LoyaltyNew World Weapon Tier List: What are the best PvP and PvE Weapons in NW Gameplay »
tags:
Truth and Consequences Quest How to proceed Truth and Consequence Quest New World Quest Guide Buy New World Coins
Related News:
New World Release Date, Price, Platform, Map, Beta and Everything You Need To Know
New World Has Been a Big Success on Steam So Far that beta sees over 200,000 players
How to Level Up Fast in New World: Best Ways to Level Up fast and quick in NW
New World Begins Open Beta from September 9th to September 12th
New World Three new weapons leaked: Daggers, Blunderbuss, and Void Gauntlet