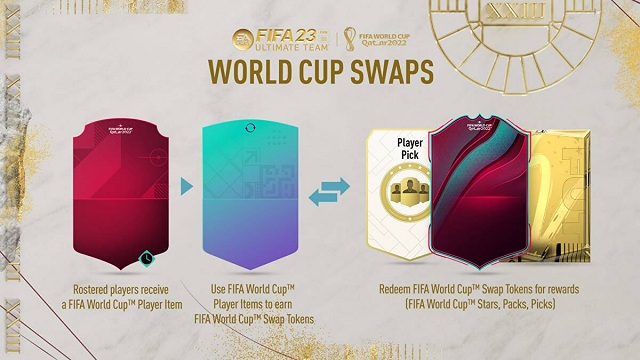 What are Swap Cards in FIFA 23 World Cup Season?

Swap cards are special cards that can be earned during the World Cup event in FIFA 23. They can be exchanged for a variety of rewards via SBCs, including 90 rated mid Icon Patrick Vieira at 40 total swaps. Other rewards include packs, player picks, and a few other World Cup players.

Here's a look at some of the best rewards available:

Swap cards are time-gated by content releases, which means you can't just grind for Vieira from the start of the event. New objectives and milestones are released weekly and throughout the week so that you can earn more swaps cards.

Throughout the World Cup event, there will be a total of 50 tokens to acquire. 1 Token is awarded to players for simply logging into Ultimate Team during the World Cup event. Another 2 Tokens are awarded for completing the seasonal experience ranks 5 and 18; you should earn these tokens passively simply by playing the game during the World Cup period. If you want to get these fast, I suggest completing the weekly bronze, silver and gold objectives to maximise your experience.

The first 14 of the 50 tokens are available to be earned by players now, with the remaining 36 to come across the World Cup season. In addition, some rewards can be earned in offline mode Squad Battles in FIFA 23, which offers its own additional rewards, while others can be earned in the FUT Live arena playing against other players online. As a bonus, the first one is given to all players after logging in following the launch of the World Cup event, with only two tokens required to pick up any of the bottom-tier rewards.

Packs of six World Cup cards can be unlocked by simply scoring a goal in Ultimate Team with a player from that Nation. Despite being time-consuming, this will help players build up coin balances which can be used to buy promotional cards such as FIFA 23's best FUT Heroes. Three of the swap tokens can be earned in rivals, but it is easier to do these in squad battles on the lowest possible difficulty making them simple tasks.

If players want to get more World Cup Swap Cards in FIFA 23, you had better take part in more matches and complete more quests in the process of matching. The more quest you complete, the more rewards you will get. In addition, there are also other interesting items for players in FIFA 23 World Cup Season, you can Buy FIFA 23 Coins to unlock them from the game-shop and equip them for your ultimate team.