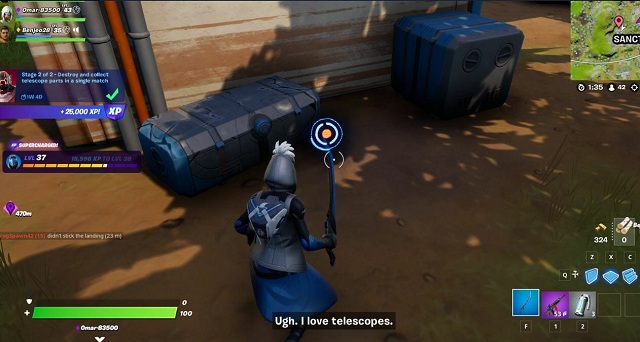 There are new Season Quests for players to do in Fortnite Chapter 3, some new players may need to find some guidance about the Season Quests in the game. One of the Season Quest is about destroying and then collecting three telescope parts in a single match. You will learn the details about how to complete this quest from this article. Additionally, players are fond of wearing unique skins for their characters, you can buy Cheap Fortnite V-BUCKS to find the beautiful skins for your character.

To complete this challenge, you need to destroy three telescopes and collect the parts in one match. If you're eliminated from the match in any fashion, then your progress for this Seasonal Quest will be completely reset.

To obtain the telescope quest, players should head to the Seven Outpost circled in red in the image below. The location is southeast of the Daily Bugle and is the largest island off the east coast of the main Battle Royale island map. After landing there, players should see the new quest in their menu. Luckily, there are two telescope parts nearby, so players can easily get 2/3 very quickly.

For this reason, it's a good idea to ensure you have a weapon and some Shield Potions ready when attempting this challenge in case you encounter other players. We recommend visiting the three Seven Outposts on the far eastern side of the map, because they are located close together - almost organised in a straight line. Starting with the most northerly outpost out of this trio, you can find the telescope sitting at the roots of the tree on the slope leading down the area containing the rifts.

How to Collect Telescope Parts in Fortnite

Start out at the Seven base northeast of the statue. This is the base with the seven different platforms on a small island. Inside the ground floor of the building on the northwest corner, you'll find a telescope that looks just like the one in the picture at the top of this page. Simply smash it with your harvesting tool and interact with the chunk that spawns as a result. Then swim/boat over to the island further to the south. On the outside of the building, you'll see another telescope.

The final telescope can be found at the Sanctuary POI. Head to largest building on the west side (the one resting on a small hill), and then go to the north side of the building. On the exterior you'll find another telescope. Check out the picture if you're having a hard time locating it.

Collecting the telescopes is a little different than most quests in the game because you also need to destroy the item first by breaking it with your pickaxe. When you approach a telescope, hit it once with your pickaxe to make it drop as an item. Then, press your primary interaction button when prompted to collect it.

Once all of the telescope parts have been collected, Fortnite players will earn a whopping 25K XP towards the Battle Pass and can move on to some other quests. Of course, these are not the only locations where the telescope parts can be found, but this is probably the best route to find three in a single match. The parts can also be found near Chonker's Speedway, Greasy Grove, Camp Cuddle, Logjam Lumberyard, Coney Crossroads, and the Daily Bugle.

Players may feel happy about doing Season Quests during matching with others, and it also make the match interesting and competitive. You can earn more XP from completing this quest, and if you want to unlock the new character, you can Buy Fortnite V-BUCKS to select what you like in the game. There are cheap prices about Fortnite V-BUCKS on z2u.com.