As the phenomenon of honour cheating intensified, WOW Classic's official was finally released its solution. Previously, even in the Warsong Gulch and Alterac Valley, players of the Alliance tribe had cheated honors for each other. The two sides who honored each other were in harmony, and there was a win-win situation in turns. To what extent is it that even normal players can't see it. Now, Blizzard officials are finally bang and burn, and they are trying to rectify these acts of honoring in the battlefield.

Blizzard officially released a blue post. Blizzard hopes that no honor will be provided for players killed who hang up in the Alterac Valley. Non-honor targets cannot be picked up. All these changes are to improve the player's gaming experience. At the same time, it can rectify the bad behavior of honour on the battlefield. 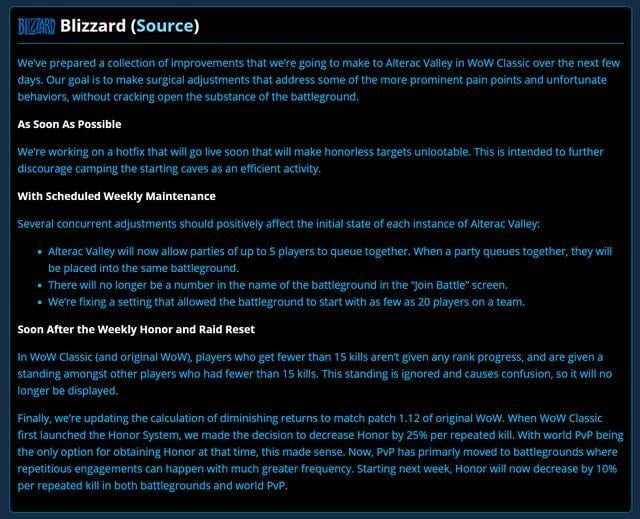 Several concurrent adjustments should positively affect the initial state of each instance of Alterac Valley:

·Alterac Valley will now allow parties of up to 5 players to queue together. When a party queues together, they will be placed into the same battleground.

·There will no longer be a number in the name of the battleground in the “Join Battle” screen.

·We’re fixing a setting that allowed the battleground to start with as few as 20 players on a team.

Blizzard has also made changes in the queuing battlefield. Blizzard has set new rules for those teams lining up to win the honor. With the new rules, players can still join the battlefield as a five-man squad. However, in Alterac Valley, if the number of teams on one side is less than 20, the battlefield will not open. At the same time, a system of diminishing returns was introduced. Under the calculation method of this new system. Repeatedly killing the same target on the battlefield and in the wild will reduce the honor, and each time the value is set to 10%. This calculation method also returns World of Warcraft to the original 1.12 version. Many ordinary players applaud madly to this modification!

Since the US service has changed, I believe that the Alterac Valley of the national service will also have such a modification soon. The setting of a battlefield was originally to make it easier for players to get honors, but this official modification is really a "The benevolent see benevolence and the wise see wisdom" setting. It will take some time to see the final effect, and it is not necessarily true whether Blizzard's goal can actually be achieved. Little friends, what do you think?